In the 10 years since Emery K. Harlan, co-founder of the National Association of Minority & Women Owned Law Firms, was featured as an ABA Journal Legal Rebel, he says little has changed for diversity in the profession.


“I think it’s stayed about the same,” Harlan says. “The lesson we can take from diversity and inclusion is that there needs to be vigilance. There can never be a point where we can say we’ve achieved all there is to achieve. I think this year’s [Am Law] partnership classes is an indicator of that.”

Indeed, Harlan, who originally was named a Legal Rebel for his efforts in fostering more racial and gender-based diversity in the legal profession, doesn’t foresee any improvements in the near future.

“NAMWOLF continues to do very good work. We are seeing an increase in terms of companies that are open and government entities that are open to considering diverse lawyers, particularly diverse law firms,” he says. “It’s still not where things should be.”

Something that has changed in the past decade is that Harlan’s law firm, the Milwaukee-based Gonzalez Saggio & Harlan, where he was a name partner, dissolved in 2016, reportedly due to unspecified financial reasons, according to the Milwaukee Business Journal. Harlan and some others from the old firm went on to open the MWH Law Group.

“I knew that since we would be a much smaller enterprise, it was important that, under the new model, lawyer productivity was going to be paramount and lawyers who were interested in making sure that women and people of color have an environment where they could be all they desire to be,” Harlan says.

The 54-year-old Harlan graduated from the University of Wisconsin Law School, which he attended on a full-ride scholarship, in 1989. After working as an associate at Ross & Hardies in Chicago, Harlan decided to move to Milwaukee to join the firm that would become Gonzalez Saggio & Harlan.

Harlan says he got the idea to move back to the Badger State from an American Bar Association minority counsel program. He saw that many lawyers of color in Chicago were leaving big firms to start their own firms and getting clients such as Aetna and State Farm.

Looking at the Milwaukee legal market, Harlan saw an opportunity. Wisconsin had government agencies with minority- and women-owned business programs, but most had not met their goals, he says. Additionally, the state had fewer lawyers of color than Illinois.

At the time, he took a significant pay cut to leave his Chicago associate position but says it was worth it. Today, Harlan estimates that his business is the largest minority-owned law firm in Wisconsin that does civil work for large corporations and government entities. 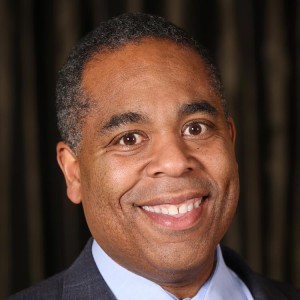 Emery K. Harlan is co-founder of the National Association of Minority & Women Owned Law Firms. Harlan graduated from the University of Wisconsin Law School in 1989. After working as an associate at Ross & Hardies in Chicago, Harlan decided to move to Milwaukee to join the firm that would become Gonzalez Saggio & Harlan.