The result is a twisty, fast-paced thriller that introduces readers to Simon, a respected law professor, and his wife, Vicky, who advocates for domestic violence victims. On the surface, the couple’s life appears mundane, but as the book’s blurb explains, “absolutely nothing is what it seems.”

Ellis has been a judge in the Illinois appellate courts system for the First District since 2014. And although Look Closer is far from a straight-up legal thriller, Ellis weaves his interest in the Fourth Amendment and the justice system into the book’s plot.

In this episode of the Modern Law Library podcast, Ellis talks to the ABA Journal’s Matt Reynolds about his writing process and career and how he balances the demands of writing with his work on the bench.

He also explains why after a long break, he decided to make Look Closer his first solo book since 2015, what he’s learned after years of working with Patterson, and what’s coming next. 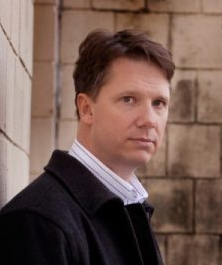 Judge David Ellis is an award-winning author of 10 novels of crime fiction, as well as eight books co-authored with James Patterson. In 2014, Ellis was sworn in as the youngest-serving justice of the Illinois appellate courts system for the First District. Ellis lives outside Chicago with his wife and three children.