Note: We refer to all our interviewees by their pen names.

Written primarily by and for women, romance novels have historically been derided in many literary circles. But with $1.438 billion in sales in 2012, the romance genre is responsible for the largest share of the U.S. book publishing market, according to Romance Writers of America. The next most successful genre is mystery, which came in at $728.2 million.

So with the number of lawyers-turned-authors out there, combined with the mammoth size of the romance publishing industry, perhaps it is unsurprising that so many romance novelists have law degrees.

“If you go to an RWA conference and you’re talking to any group of authors of more than about eight people, and you say, ‘Well, the day job is I practice law,’ it’s amazing the number of people who say, ‘Oh yeah, me too! What kind?’” says Grace Burrowes, who runs a solo practice and has written more than 20 romance novels.

“There’s a horrible stereotype of both the romance writer and the romance reader as somehow undereducated and unprofessional, when in fact there are a number of incredibly well-educated professional women who have chosen to leave their other careers and go into writing romance,” says author Lauren Willig, who sold her first novel, The Secret History of the Pink Carnation, when she was a 1L at Harvard Law School. “I got that in law school only from one person, a guy in my section who was not the brightest dish in the drawer. When the news got out about the book deal—and I published under my own name, so it was all over the place—he said, ‘Oh, so you’re writing one of these sex books,’ and I said, ‘No, no, it’s a romance novel, there’s a difference!’ And then I graduated magna cum laude and he didn’t get honors, and he stopped being quite so snarky.”

In honor of Valentine’s Day, ABA Journal podcast editor Lee Rawles spoke with four lawyer romance novelists about their careers; how their legal training helped them as writers; and misconceptions people hold about both the law and about the romance genre.

Grace Burrowes grew up in central Pennsylvania and is the sixth out of seven children. She has bachelor’s degrees in political science and music history from Pennsylvania State University; a master’s degree in conflict transformation from Eastern Mennonite University; and a JD from George Washington University. Her debut novel, The Heir, was chosen as one of the Publishers Weekly Top Five Romances for 2010. She is a child welfare attorney in Maryland.

After graduating from law school, New York Times and USA Today best-selling author Julie James clerked for the Atlanta-based 11th Circuit U.S. Court of Appeals. She then practiced law with one of the nation’s largest firms for several years until she began writing screenplays. After Hollywood producers optioned two of her scripts, she decided to leave the practice of law to write full-time. James’ books have been listed on the American Library Association’s Reading List for Top Genre Novels, Booklist’s Top 10 Romances of the Year, and have been translated into 15 languages. She lives with her husband and two children in Chicago, where she is currently working on her next book.

Lauren Willig is the New York Times best-selling author of 11 works of historical fiction. Her books have been translated into more than a dozen languages, awarded the RITA, Booksellers Best and Golden Leaf awards, and chosen for the American Library Association’s annual list of the best genre fiction. After graduating from Yale University, she embarked on a PhD in English History at Harvard before leaving academia to acquire a JD at Harvard Law while authoring her “Pink Carnation” series of Napoleonic-set novels. She lives in New York City, where she now writes full time. 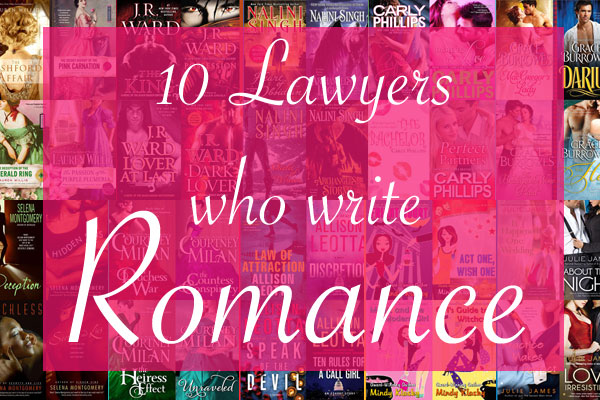 The romance genre is responsible for the largest share of the U.S. book publishing market, according to Romance Writers of America. So with the number of lawyers-turned-authors out there, combined with the mammoth size of the romance publishing industry, perhaps it is unsurprising that so many romance novelists have law degrees…