What can past presidential history teach us about today? (podcast)

The law is not Dallas attorney Talmage Boston's only love. He's had a fascination with presidential history since he was 7 years old.


In recent years, he has “become increasingly fascinated with it, given that so many of our top historians and nonfiction writers are devoting themselves to writing presidential biographies or studying the presidencies of different leaders over the years,” Boston says.

Boston made it his mission to conduct interviews with many of these well-known historians in front of live audiences, focusing the interviews on 20 historically significant presidencies. The edited transcripts of those interviews are compiled in his new book, Cross-Examining History: A Lawyer Gets Answers from the Experts About Our Presidents.

In honor of the 2016 election, Boston joined the ABA Journal’s Lee Rawles for this episode of The Modern Law Library. He talked about this labor of love; the importance of considering historical context when judging a president’s actions; and what past history may tell us about the future of the Trump administration.

About the current political climate, Boston said that “we are more barraged with information from pundits and from both sides than we’ve ever been before, and it is consuming people’s mindsets unlike any time in our history.”

However, this does not mean that he believes the United States is necessarily more divided than it’s ever been. “I think our national level of agitation is probably ramped up and higher than it’s ever been, but in terms of, quote, ‘sheer polarization,’ you could not get any more polarized than during the presidency of John Adams or immediately before and after the election of Abraham Lincoln,” he says. 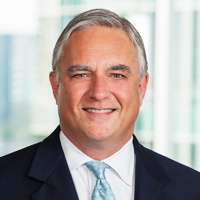 Talmage Boston has been a commercial litigator in Dallas since 1978, and a shareholder at the Winstead PC law firm since 1997. In addition to maintaining his full-time law practice, Talmage has authored Cross-Examining History: A Lawyer Gets Answers From the Experts About Our Presidents; Raising the Bar: The Crucial Role of the Lawyer in Society; Baseball and the Baby Boomer; and 1939: Baseball’s Tipping Point. Since 2010, Talmage has interviewed and moderated programs with best-selling authors and public figures for the World Affairs Council of Dallas/Fort Worth, the Lyndon B. Johnson Presidential Library, the George W. Bush Presidential Library, the SMU Center for Presidential History, and the Great Washington Writers Series. He and his wife Claire live in Dallas and have a son and a daughter.