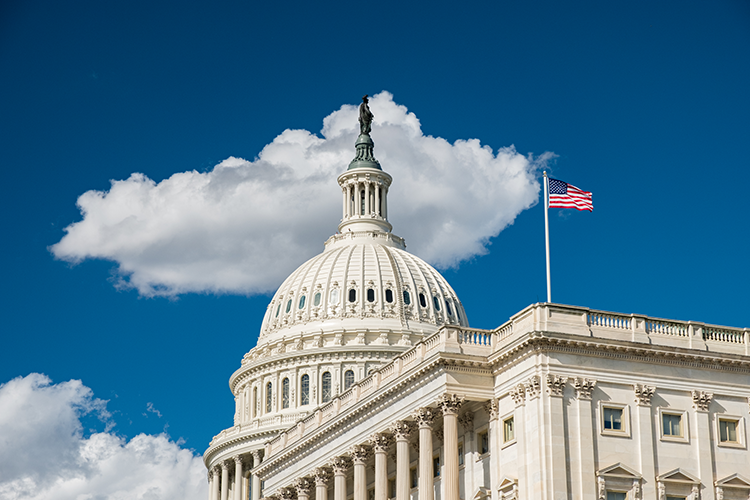 Despite tumultuous times and contentious political backdrop, the ABA Governmental Affairs Office scored major victories during the 117th Congress by working successfully with ABA leadership, entities and grassroots advocates to advance the association's positions on multiple significant policy issues affecting the legal profession, access to justice and the rule of law.

The 117th Congress, which began on Jan. 3, 2021, ushered in a two-year period of unified government with the Democratic party in control of the executive and legislative branches. Despite the slim majorities by which the Democrats controlled the House and the Senate (with Vice President Kamala Harris serving as the tiebreaker in her constitutional role as president of the Senate), this should have set the stage for easily won congressional victories. But intervening events rapidly altered that expectation.

From the start, tensions on the Hill were high, with some members of Congress challenging election results. But they soared on Jan. 6, 2021, when a mob attacked the U.S. Capitol building, seeking to prevent the joint session of Congress from counting and certifying the Electoral College vote to formalize the presidential election results. In response to the January 6 attack, the House of Representatives convened a select committee to investigate the assault in July 2021. Its proceedings dominated discourse throughout both sessions of the 117th Congress, further elevating political tensions.

During the 117th Congress, President Joseph R. Biden and Congress were preoccupied and divided over how to respond to the ever-changing pandemic, face-mask mandates, a strained health care system, failing businesses, supply chain disruptions, spiraling inflation, worker shortages, the Russian invasion of Ukraine and other contentious issues.

Many successes, however, were achieved by ABA advocacy during the 117th Congress, the most notable of which are described below.

• Enactment of the Electoral Count Act as part of the “Consolidated Appropriations Act of 2023” (the Omnibus) (Pub. L. 117-328), which raises the threshold for Congress to object to a state’s electoral votes and clarifies that the role of the vice president in certifying results is purely ministerial.

• Enactment of a $560 million appropriation for the Legal Services Corporation to help provide legal services to more low-income Americans as part of the FY 2023 Omnibus (Pub. L. 117-328), a 14.5% increase over last year.

• Enactment of the Supplemental Appropriation for Disaster Relief as part of the FY 2023 Omnibus (Pub. L. 117-328), which includes $20 million for LSC to help victims of natural disasters nationwide.

• Enactment of the Pregnant Workers Fairness Act as part of the Omnibus (Pub. L. 117-328), to safeguard the health and economic security of pregnant workers by giving them legal tools to secure reasonable, short-term accommodations without fear of retaliation.

• Enactment of the “Repealing Existing Substandard Provisions Encouraging Conciliation with Tribes Act” or the “RESPECT Act” (Pub. L. 117-317), which will strengthen the federal government’s ability to uphold its trust and treaty responsibilities by codifying requirements for meaningful tribal consultation.

• Enactment of the Daniel Anderl Judicial Security and Privacy Act as Sections 5931 - 5939 of the FY 2023 National Defense Authorization Act (NDAA) (Pub. L. 117-263), which provides all federal judges and their immediate families with enhanced security by restricting online access to personally identifiable information, such as home addresses, car license plates, personal telephone numbers, and the location of schools attended by immediate family members. It also authorizes funding for the U.S. Marshals Service to hire additional trained personnel to anticipate and deter threats.

• Enactment of the Respect for Marriage Act (Pub. L. 117-228), which requires the federal government to recognize a marriage between two people if the marriage is valid in the state where it was performed. It also requires states to give full faith and credit to legal marriages, regardless of the couple’s sex, race, ethnicity or national origin.

• Enactment of the Violence Against Women Reauthorization Act of 2022, which was signed into law as part of the First Session’s FY 2022 Omnibus spending bill (Pub. L. 117-103). It includes the bipartisan Intimate Imagery and Privacy Protection Act that establishes a federal civil cause of action for individuals whose intimate images are disclosed without their consent.

• Student Debt Relief and Public Service Loan Forgiveness. During both sessions of Congress, the administration took significant action to ease student debt and pause loan repayment obligations. Two weeks after an ABA-led Student Debt Week of Action in September 2021, the Education Department announced plans to overhaul the PSLF program to make it easier for borrowers to understand and access the program. President Biden ordered additional improvements when he issued an executive order in December 2021 that instructed federal agencies to further streamline PSLF to help eligible borrowers. In August 2022, the Administration announced that it planned to cancel up to $10,000 in federal student loan debt for borrowers earning less than $125,000, plus up to $10,000 in additional relief for Pell grant recipients. This plan has been challenged in the federal courts, and the Supreme Court has agreed to hear two cases in February 2023. In light of these legal challenges, the administration extended the federal student loan payment pause through June 2023 or until the challenges are resolved, whichever comes first.

• Rental assistance and eviction moratorium. Illness and loss of jobs due to the pandemic exacerbated housing insecurity, especially among renters. The American Rescue Plan Act, enacted in FY 2021, provided an additional $21.6 billion for the Emergency Rental Assistance program, offering financial relief for both landlords and tenants. The ABA also advocated for multiple eviction moratoriums, the last of which expired on Aug. 26, 2021.

• Expanded broadband access. During the First Session, Congress allocated over $72 billion between a coronavirus relief package and the infrastructure bill to expand broadband networks to rural areas and other underserved communities and provide subsidies for those who cannot afford services. The FY 2023 Omnibus bill provided an additional $455 million to further expand broadband access and affordability to rural America and tribal communities.

• Progress on additional legislative advancements. The GAO also made progress on other issues as well. Legislation that passed one chamber included H.R. 546, the Effective Assistance of Counsel in the Digital Era Act, which would guarantee protection of the Attorney-client privilege over electronic messages between lawyers and their federally incarcerated clients; H.R. 1693, the EQUAL Act, which would equalize the treatment of powder and crack cocaine in calculating federal sentences; H.R. 7, the Paycheck Fairness Act, which would update the Equal Pay Act of 1963 to prohibit gender-based pay inequality; and H.R. 5, the Equality Act, which would prohibit discrimination on the basis of sex, sexual orientation and gender identity in public accommodations, education, the jury system and other areas of public life. There also were numerous regulatory advancements on a range of policy issues championed by the ABA.

While much was accomplished during the 117th Congress, there is plenty of unfinished business as the 118th Congress gets underway. The GAO team is ready for the challenge and is already working with ABA leaders and entities to identify opportunities in Congress and throughout the executive branch to advocate for ABA policy issues affecting the legal profession, access to justice, and the rule of law.

This report is written by the ABA’s Governmental Affairs Office and discusses advocacy efforts by the ABA relating to issues being addressed by Congress and the executive branch of the U.S. government.