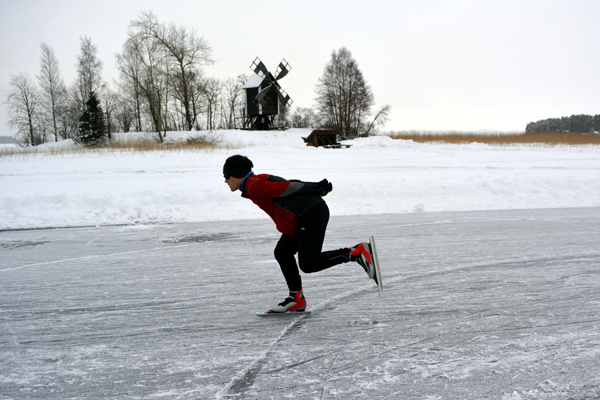 When Bill Burgess needs to clear his head, his favorite thing to do is head outside and hit the ice. “Skating outside makes me feel like a little kid in Alaska again,” says the busy appellate litigator. His was a military family, moving about every three years for his father’s career in the Special Forces, but Burgess says that wherever they were, from Arizona to Massachusetts, outdoor activities were a constant. Some of his most cherished memories involve learning to ice skate with his dad, mother and sister in Fort Richardson, Alaska. The four would spend hours playing tag on frozen lakes, surrounded by majestic trees and clear blue skies.

Burgess is a lifelong athlete—he’s completed five Ironman races, often bicycles to work and plays hockey late at night. In 2010, he was looking for a new challenge, and he remembered back when he was 15 and his dad told him about an epic race called the Elfstedentocht (11 cities tour). This speedskating race stretches across 125 miles of canals in the northern Netherlands. The Dutch dominate the sport of speedskating, and this race is a national obsession. Unfortunately, it only takes place in the years when the weather is cold enough to sustain thick ice, something that hasn’t happened since 1997. But Burgess wasn’t deterred. Although he didn’t even own a pair of racing skates at the time, he decided to do as diehard Dutch speedskaters do and race the same distance around a frozen lake in Austria. As soon as he did it, he was hooked.

For the past three Februaries, Burgess has participated in the grueling 125-mile event on Lake Kallavesi at the Finland Ice Marathon, another Dutch skater favorite. He even won the race last year, receiving his trophy from the Dutch ambassador to Finland. More fulfilling than the win, Burgess says, was that his dad was there to see it. “He got a big kick out of it, that he taught me how to skate, and now 30 years later, it’s led to this.”