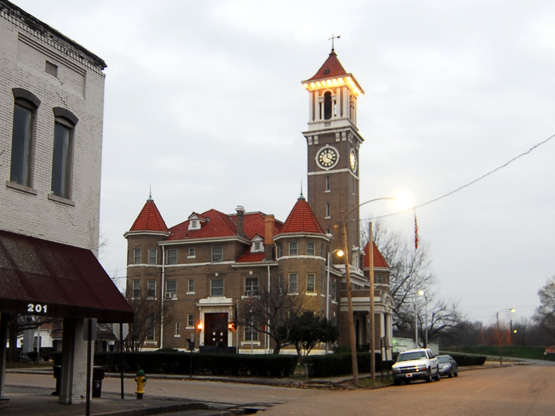 According the website Ghost Eyes, the eerie cries which come from the basement of the Monroe County Courthouse and the dancing lights which can be seen along the levee are the result of a violent lynching which took place in 1898.

The Encyclopedia of Arkansas History & Culture says that the trouble began in the household of John and Mabel Orr. John, an actor, was reportedly abusive to his wife, and the couple had violent arguments. On Aug. 5, he was shot and killed by an unknown assailant through his kitchen window. Stories swirled about how Mabel had been complicit in his murder, along with the family servants, and how voodoo had been involved.

Mabel and four of the Orrs’ African-American servants were taken to the jail in the basement of the courthouse, where Mabel took poison and died. The four servants, Manse Castle, Will Sanders, Sanders’s mother Rilla Weaver and Dennis Ricord were seized from the jail by a “most orderly” mob and lynched on Aug. 9, (possibly along with the maid, Suzie Jacobs). The Encyclopedia of Arkansas History & Culture says that Mabel’s body was publicly displayed in the courthouse, to assure people that she had not escaped.