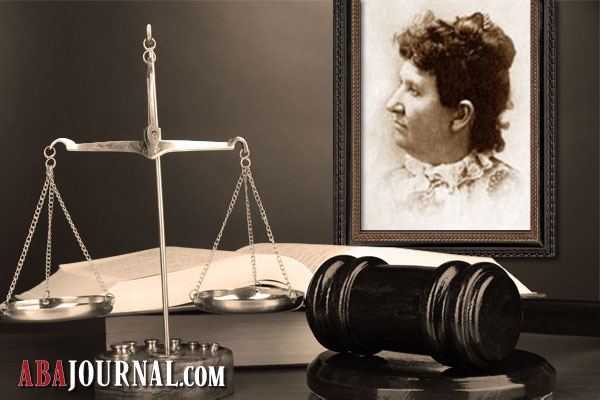 Ada Kepley of Effingham, Ill., became the first American woman to graduate from law school in 1870. Three years earlier, at the age of 20, she had married attorney Henry Keply. Henry trained her to be his legal assistant, and she soon decided to attend the Union College of Law (now known as the Northwestern School of Law.)

Although she had graduated, women could not at that time join the Illinois state bar. Though legislation passed in 1872 to allow this, she did not join until 1881. And although she occasionally appeared in court to represent a case, she had no steady practice.

Instead, she focused her attention on the temperance movement. She would publish a list of men who frequented saloons in her monthly temperance paper The Friend of Home, and faced physical violence to oppose the selling of alcohol. In 1881, she ran for Illinois State Attorney General as the Prohibition Party candidate. Of this election, she said, “There wasn’t a ghost of a show, but it was good agitation.” She continued to agitate for women’s suffrage—and briefly resigned from the Prohibition Party when its women’s suffrage plank was temporarily removed.

She was ordained as a Unitarian minister in 1892, and did speak from the pulpit. But after her husband’s death in 1906, her monetary resources were few—though she tried her hand at farming and writing books, including an autobiography. She died in 1925 in poverty, considered by the townspeople of Effingham to be an eccentric.