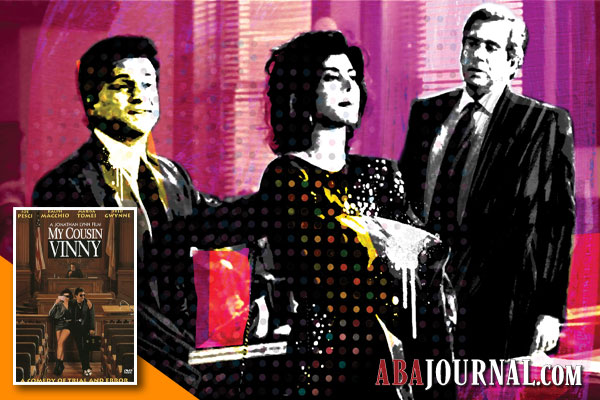 Joe Pesci plays an inexperienced but inventive New York City lawyer who finds himself defending two clients in a murder trial in an unfamiliar Alabama courtroom. Marisa Tomei is cast as Mona Lisa Vito, an “out-of-work hairdresser” who also happens to be Vinny’s fiancee.

Scene: In the final trial sequence, Vinny calls an unsuspecting Mona Lisa to the stand to testify as an expert witness for the defense. In so doing, he draws an objection from the prosecutor (Lane Smith), who rises to question Mona Lisa’s expertise. He then conducts a brief voir dire of Mona Lisa—which, curiously, takes place in the jury’s presence—to determine whether she is indeed qualified to testify. Impressed by the depth of her automotive knowledge, the prosecutor withdraws his objection and the judge permits her to testify. Through her testimony, Vinny wins an acquittal for his clients.

Lesson for lawyers: Earlier in the film, the prosecutor had called to the stand George Wilbur (played by James Rebhorn), the special automotive instructor of forensic studies for the FBI, who testified that the tire marks left at the scene of the crime match the tires of the vehicle driven by Vinny’s clients. Wilbur, of course, is a more traditional expert witness with a formal education and career. Mona Lisa, on the other hand, learned about automotive issues not from school or career but from firsthand experience in her family’s auto mechanic business.

Released more than a year before the U.S. Supreme Court issued its opinion in Daubert v. Merrell Dow Pharmaceuticals, My Cousin Vinny recognizes the dilemma that courts face when determining whether to admit expert testimony. Although Mona Lisa lacks formal credentials and education, she could testify as an expert by virtue of her experience (which she established by answering a series of complex questions posed by the prosecutor).