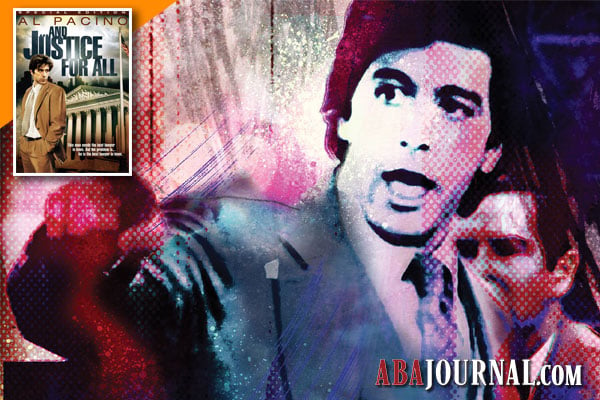 Al Pacino stars as Arthur Kirkland, a criminal defense attorney with a passion for provoking the system in the name of “justice.” Kirkland fights the good fight and defends those he believes innocent against those who would trifle their plights—even taking a swing at a judge—but once Pacino is blackmailed into representing a judge he publicly despises (who just so happens to be accused of rape), the defense attorney trades in a “forgotten” instance of a violation of attorney-client confidentiality for a very publicly displayed breach of his ethical obligation.

Scene: As Kirkland begins his opening statement, he explains to the jury that—even though there is a hotshot prosecutor on the other end of the argument just itching to make a name for himself by convicting a judge—“these proceedings are not about that. These proceedings are here to see that justice is done. … And justice is, as any reasonable person would tell ya, the finding of the truth.”

Kirkland continues to lay the foundation for his momentous meltdown by explaining that “the intention of justice is to see that the guilty people are proven guilty and that the innocent are freed. … However, it is the defense counselor’s duty to protect the rights of the individual. … Justice for all. Only we have a problem here. … Both sides want to win … regardless of the truth.”

Ultimately, the real problem is revealed to be Kirkland himself. During his opening, Kirkland does everything he can to compromise the trial—and his ethical obligations—by explaining to the jury that his client took a polygraph test (twice), and that he has to “get” his client because the prosecution won’t be able to prove its case, and his client “should go right to fucking jail!”

Lesson for lawyers: Kirkland is a tough man stuck in the middle of a tough case, just like many criminal attorneys of cinematic lore. Kirkland is blackmailed into taking the case because the judge knows of a previous breach of confidentiality he has committed. However, in the name of justice, Kirkland continues to compromise one of the most sacred aspects of the legal profession: the obligation of attorney-client confidentiality.

As a practicing criminal defense attorney, I can tell you that not every client is innocent, and sometimes the client’s admission of guilt to his or her attorney can go a long way toward preparing and presenting a defense. It is not the attorney’s job to decide innocence or guilt; it is the attorney’s job to zealously represent his or her client. In the criminal field, that means protecting the client’s constitutional rights and forcing the prosecution to prove their case, not proving it for them.

Though it provides a great deal of entertainment value, this scene underscores the difficult disconnect some attorneys face between the ethical obligations they owe to their defendant-clients and the internal morality they personally feel. Kirkland knows the system should provide justice for all. That includes the guilty client.