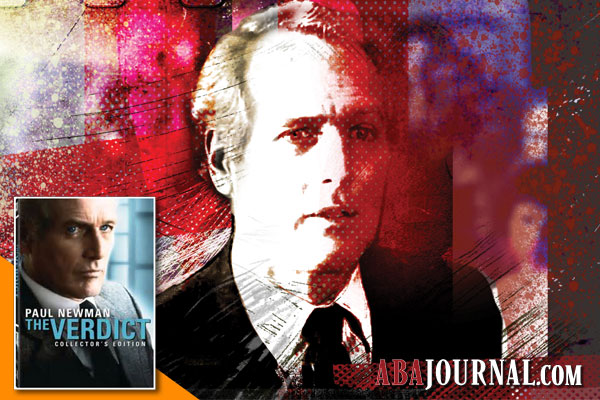 Paul Newman plays an alcoholic lawyer (Frank Galvin) in a downward spiral who rejects a lucrative settlement offer in a medical-malpractice case, deciding instead to redeem his career and seek justice by taking the case to trial.

Scene: In one of the film’s closing scenes, Galvin delivers his summation to the jury, a defining moment in which he talks to the jury about faith in the justice system while seeming to be reclaiming that very faith for himself.

“So much of the time we’re just lost. We say, ‘Please God, tell us what is right. Tell us what is true. And there is no justice. The rich win. The poor are powerless. We become tired of hearing people lie. And after a time we become dead. We think of ourselves as victims. And we become victims. We become weak. We doubt ourselves. We doubt our beliefs, we doubt our institutions, and we doubt the law. But today, you are the law. You are the law. Not some book. Not the lawyers. Not the marble statue or the trappings of the court. These are just symbols of our desire to be just. They are in fact a prayer, a fervent kind of frightened prayer. In my religion, they say act as if we have faith. Faith will be given to you. If we are to have faith in justice, we need only to believe in ourselves and act with justice. I believe there is justice in our hearts.”

Lesson for lawyers: Galvin’s closing argument serves both a plot function and provides a good storytelling lesson for lawyers. Stylistically, screenwriter David Mamet’s language is powerful and poetic. Galvin’s impassioned summation illustrates how lawyers can sometimes speak to juries in unexpectedly intimate and compelling ways. Galvin also captures our shared desire for justice in an often corrupt world. The scene shows how lawyers can implore the jury to look within themselves to find justice. For a moment, they are the law and they are empowered to find justice.