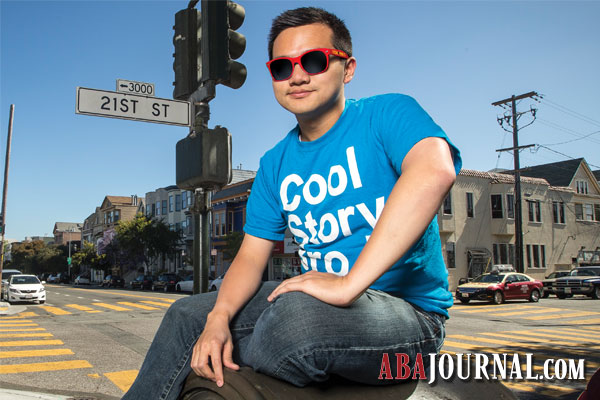 Tim Hwang went to law school and became a lawyer for one reason: To kill the legal profession as we know it.

Fascinated by the possibilities of using technology and automation to create efficiencies that were not present in the legal market, Hwang figured the best way for him to test his theories would be to become a lawyer.

“I saw myself as being undercover at law school,” says Hwang, 27, who graduated from the University of California at Berkeley’s Boalt Hall in 2013. He then joined Davis Polk & Wardwell; but unlike many of his fellow first-year associates, he wasn’t looking to make partner. Indeed, he didn’t even make it to his yearly evaluation. All he wanted to do was test out some software he had written that was designed to do much of his work for him.

Once he knew his software worked, he set about his real objective. Hwang set up his own law firm that would use technology to automate as much paperwork as possible, freeing up lawyers to concentrate on more complex matters.

“Part of the problem with law firms is that, from a client’s point of view, they haven’t thought a great deal about what their users want,” says Hwang. The firm hasn’t officially launched as Hwang says he’s still testing out the technology and workflow, however the firm (which includes two other human lawyers besides Hwang) is already representing some clients on IP and incorporation matters.

Among his plans is one to introduce software that will allow junior associates to automate their workload the way that he did at Davis Polk. The free, open-source software is called Top Gun, and, according to Hwang, is themed after the 1986 movie starring Tom Cruise (“I feel the need—the need for speed!”).

“We’re hoping to provoke a broader discussion about the price of legal services and the efficiency of legal practice in general with it,” Hwang says.