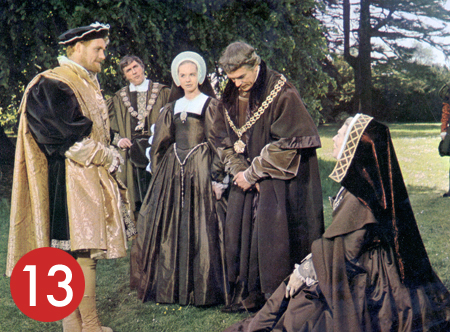 Paul Scofield’s Oscar-winning performance as Sir Thomas More, the Tudor-era judge made chancellor of England. He is caught in the political struggle involving Henry VIII’s decision to defy the Roman Catholic Church and divorce his wife to wed Anne Boleyn.

Lines from playwright Robert Bolt’s stirring script are fre­quently quoted in U.S. court opinions: “I know what’s legal, not what’s right. And I’ll stick to what’s legal.” And: “This country is planted thick with laws, from coast to coast—man’s laws, not God’s! And if you cut them down, and you’re just the man to do it, do you really think you could stand upright in the winds that would blow then?”