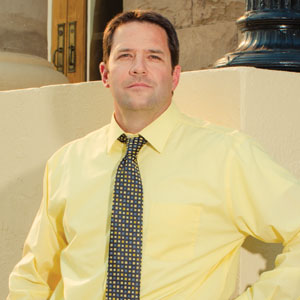 If you lived in far northwest Mohave County, Arizona, it might take more than an hour to get to the nearest court building in Colorado City, and you’d have to drive into Utah to get there. Residents of the area, called the Arizona Strip, are cut off by the Grand Canyon, the Colorado River and the Virgin River Gorge.

The kiosk can access any of the county’s courtrooms, and users can make court appearances, pay fines, get forms and make filings through it.

Mohave County has a high poverty rate with many low- and fixed-income residents, says Charles W. Gurtler, presiding judge of the Mohave County Superior Court. Those residents may not have reliable vehicles or enough gas money to make the drive to the North Canyon court. So a request for relief from Barbara Brown, a North Canyon justice of the peace, found receptive ears.

“The kiosk has been an absolute godsend as far as those people are concerned,” Gurtler says, adding that its total cost was about $7,000.

Another technology project at the superior court is courthouse posters with bar codes that smartphones can scan, providing access to jury and divorce information, calendars and physical directions.

There’s also an Internet chat line staffed by court employees, and Rimel and his staff installed and maintain audio-video equipment with push-button controls in 19 courtrooms. If they had hired an outside vendor, Rimel says, installation fees would have cost approximately $20,000 per courtroom.

“We like to think of ourselves as an innovative court, and we’re really excited about moving forward,” Rimel says. “Our goal is to be one of the most technologically advanced courts in Arizona.”

Aside from 2½ years in Memphis, Tennessee, where he worked for the information technology outsourcing company Affiliated Computer Services, Rimel’s entire career has been in Mohave County. When he started working for the court in 2003, its IT department only had one computer server and a part-time employee.

“I was surprised to see how little technology made its way into the court system,” Rimel says. “They were really excited to get their calendars on the Internet.”

Today the department has 10 servers and four full-time employees, including Rimel, who describes the court as “one of the best places I have ever worked.”

When you handle technology matters for court systems, he says, you must understand that they operate differently from many other entities. And you need everyone’s trust.

“You have to have sponsors to move the project forward,” Rimel explains. You might have a judge’s support for technology generally, “but when you talk about [bar codes], they get this blank look. So you need to understand that maybe the judicial assistant is the one you really want to sell this to.”

“Kyle’s been instrumental in outfitting our courtrooms as e-courtrooms, which has sped up the process of presenting cases and allowing for PowerPoint presentations,” Gurtler says. “Kyle’s the rock star of the IT world as far as the local bench is concerned.”

Rimel, a Kingman native, and his wife, Jennifer, don’t seem daunted by big tasks. The couple live in the Hualapai Mountains in the second home they built themselves. They started on their first home when he was 18 and she was 17.

“I was a carpenter at the time and she worked in an eye-care center. Every paycheck would go toward the house,” Rimel says. “After saving and building a wall every few weeks, we were able to move in four years later.”

Rimel’s family has been involved in team roping, and he still enjoys the rodeo sport. It involves two people on horseback, working together to rope a calf as quickly as possible.

Team roping and IT work have few similarities, Rimel says, but the commonality seems significant.

“I cannot think of anything that would correlate between the two,” he says, “other than possibly awareness and a level of common sense that is needed in both areas.”