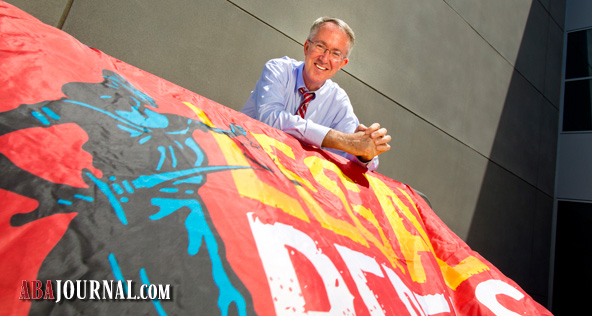 When Fred Rooney graduated from the City University of New York School of Law in 1986, his income was so low that he qualified for the services he provided to others as a legal aid lawyer.

“My son was born in my last year of law school, and 16 months later my daughter was born,” Rooney recalls. “We got WIC [food aid], fuel assistance and subsidized day care. It was either that or we wouldn’t have heat or food. We couldn’t live off my salary.”

Rooney lasted a year in that job, but 11 years of private practice later, he got a heads-up about a CUNY job helping lawyers who wanted to represent the poor but lacked the skills to do it properly.

“I took a two-year leave and haven’t been back,” he says.

Rooney used the position to start filling a gaping hole in the law–access for all to legal services–and created a program to train lawyers serving poor and moderate-income clients to become not just good advocates but smart businesspeople too.

“We started a network where we had full-time staff to provide to graduates developing small and solo firms the kinds of services they’d get if they were at a large firm,” he says. “It was the beginning of a movement in the United States to support graduates.”

Rooney applied what he’d learned from that program into the first law firm incubator, created in 2007 at CUNY. Then in 2008, the economy collapsed.

“Students were saying to law schools, ‘We just amassed $250,000 in debt and there are no jobs! What are you doing for us?’” Rooney recalls. “All of a sudden, my phone started ringing.”

Today, there are 17 such incubators, nine of which Rooney has been directly involved in creating. In general, for 12-18 months lawyers pay rent for shared office space and training in business skills and professional development.

In 2012, Rooney logged 55 flights across the planet to get incubators off the ground. At least 15 are on the drawing board.

But more are sure to come because in July Rooney joined Touro College Jacob D. Fuchsberg Law Center in Central Islip, N.Y., to head the International Center for Post-Graduate Development & Justice, a national clearinghouse for the law firm incubator and legal residency movement.

“We’ll bring together all the post-graduate programs that have emerged since we started and provide technical training and support to current incubators and schools interested in starting incubators,” Rooney says.

“He’s very committed to making access to the legal system more available to people who otherwise would be excluded,” says Bob Seibel, a professor at San Diego’s California Western School of Law, which just launched its second incubator. “At the same time, he’s very supportive of solo and small-firm practitioners and people who want to engage in nonprofit work.”

Rooney’s experience makes him uniquely qualified to carry the incubator torch, says Luz E. Herrera, a 2009 Legal Rebel and associate professor at Thomas Jefferson School of Law in San Diego. “Fred was a legal aid lawyer who couldn’t make a living, so he has the personal experience of not only understanding poor and low-income clients, but also as an attorney representing them,” she says. “Also, his work has no borders. He’s willing to take this model and develop it in different places.”

At age 60, Rooney’s humbled yet happy the concept is snowballing. “Our kids say ‘liberty and justice for all,’ and it’s just not so,” he says. “We have a deep moral responsibility to ensure that what we venerate and have our children believe is actually true.

“I learned fairly soon after I got out of law school I couldn’t change the world, but I could help people change their lives. That became the mantra for my life.”