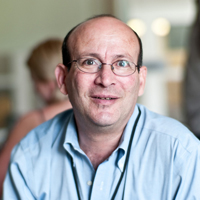 With reality TV all the rage, it may only be a matter of time before camera crews start following Carl Malamud. Exterminators, nannies and fishermen get their own shows, so wouldn’t it make sense that America would tune in to watch a guy who resembles Paul Simon—the musician, not the late senator—driving an old Jeep Wrangler from library to library to check out how they’re storing documents?


With reality TV all the rage, it may only be a matter of time before camera crews start following Carl Malamud. Exterminators, nannies and fishermen get their own shows, so wouldn’t it make sense that America would tune in to watch a guy who resembles Paul Simon—the musician, not the late senator—driving an old Jeep Wrangler from library to library to check out how they’re storing documents?Malamud, 50, is a true 21st century activist. With little more than a deep sense of justice and two portable scanners in the back of that Jeep, he’s spent years upending the way the government does business.

Malamud’s crusade is simple: to make public-domain legal materials actually accessible to the public. Through his foundation, Public.Resource.org in Sebastopol, Calif., he’s making progress. The foundation is funded by donations from individuals and private foundations, and through matching grants from people like eBay founder Pierre Omidyar and trial lawyer David Boies.

Hear Carl Malamud talk about what greater access to legal documents will mean.

Though not a lawyer, Malamud has spearheaded some serious coups de text in the world of primary legal materials. In the early ’90s he put the federal Securities and Exchange Commission’s EDGAR database online (over the agency’s objections), then got the commission to finish the job by offering the database online for free.

Over the years he’s posted several hundred million pages of documents to the Web (90 million pages in the last 18 months), including databases surrendered by agencies, records bought outright, and countless cases downloaded from PACER and donated to the cause by a network of like-minded volunteers.

Malamud’s latest campaign—and why he’s adding to the 170,000 miles already on his odometer—is to liberate the Code of Federal Regulations, state administrative regulations and public safety codes (think building codes) incorporated by reference into state regulations.

The effort might seem trivial, but tell that to the plumbing apprentices and homeowners who have written to thank him for granting them access to supposedly public information.

“This isn’t about ‘Everything must be free.’ We are not a bunch of socialists,” Malamud insists. He has nothing against for-profit information dealers like Thomson Reuters (Westlaw) and Reed Elsevier (Lexis-Nexis), either. “I am just against these artificial barriers to entry, and I am very against information that’s supposed to be public that’s only accessible if you have a credit card.”

For Malamud, action is imperative. Without it, he says, he’d just be “another angry guy in a coffee shop ranting at the government.”

He actually wouldn’t mind being a federal employee, and he’s launched a spirited campaign to become the head of the U.S. Government Printing Office. His motto? “Yes we scan.” But despite a glowing profile last February in the New York Times, Malamud has yet to land the job.

But he doesn’t feel snubbed. “I am not your ideal civil servant,” he admits. “But it was a useful way to bring a lot of useful attention to the office—it’s raised awareness of a lot of the issues, so I am happy about that.”

Malamud-watchers likely weren’t surprised by the campaign. And it’s added to Malamud’s reputation as a bit of a renegade, albeit the “right sort of renegade,” clarifies Fred von Lohmann, a senior staff attorney with the Electronic Frontier Foundation in San Francisco. This means Malamud “does things that on their face seem revolutionary and sort of radical,” yet actually follows the law and consults with lawyers, including von Lohmann.

“What’s so refreshing about Carl, he has an impatience about public access that is wonderful to behold,” von Lohmann says. “His MO is to demonstrate to people what is actually possible, and thereby shame them into doing the right thing.”

But von Lohmann points out that Malamud never takes himself or his quest too seriously. Case in point: the Shepard Fairey-style poster of Malamud’s own face selling on his website for $150 and the photo-illustrations he created of a Lego-people chorus declaring “Code is law” to illustrate the importance of accessible regulatory material.

Next up, Malamud’s writing a book (his ninth) he’s calling Hacking Government, a how-to for people to change the way the government behaves. And true to his core values, notes for the book along with other musings can be accessed on Twitter.

It’s a free, convenient way for him to keep things organized, he says. “I can always go back through my Twitter stream and say, ‘There it is!’ ”