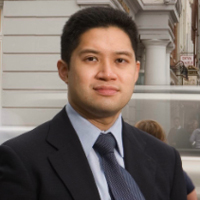 “I confess to a fondness for gossip, which, indeed, is a conservative genre. Gossips do not want to change the world; they want to enjoy it.”
—Jeffrey Peter Hart
Essayist and professor emeritus at Dartmouth College


“I confess to a fondness for gossip, which, indeed, is a conservative genre. Gossips do not want to change the world; they want to enjoy it.”
—Jeffrey Peter Hart
Essayist and professor emeritus at Dartmouth College

While the quote on David Lat’s Facebook profile pays tribute to his enjoyment of rumor and scandal, there’s no denying the snarky legal gossip’s impact on the transparency and dissemination of information at many of the nation’s largest law firms.

Above the Law, the legal tabloid blog that Lat created, receives 8-10 million page views a month, with roughly 600,000 unique visitors a month.

“There was a hunger in the market,” says Lat, 34. “These law firms are large, wealthy and powerful institutions that generally don’t like to talk about how they work.”

“So when you proffer information, people get excited. They are peeking behind the curtain,” he continues. “Other sites and Above the Law have changed the ways firms communicate. We are moving in the direction of greater and greater transparency.”

The irreverent blog is a follow-up to Lat’s first, anonymous foray into the blogosphere, Underneath Their Robes, a cheeky chronicle of the nation’s judges. UTR hosted a write-in contest for “male superhotties of the federal judiciary,” a title bestowed on U.S. Court of Appeals Judge Alex Kozinski after the 9th Circuit jurist wrote in to the site jokingly laying out his credentials.

Lat outed himself as the UTR blogger in 2005 in The New Yorker—a pre-emptive strike against those who had matched his IP address to his alter ego, Article III Groupie.

That revelation created a stir at the U.S. attorney’s office in Newark, N.J., where Lat was an assistant federal prosecutor with a gold-plated track record. The son of Filipino immigrants, Lat worked as a federal appeals court clerk after earning degrees from Harvard College and Yale Law School, where he was vice president of the campus Federalist Society.

“David was an exceptional lawyer with a wonderful sense of humor in chambers,” says 9th Circuit Judge Diarmuid O’Scannlain, for whom Lat clerked. “He had a very acerbic wit then, and obviously still does.”

Bankrolled by Breaking Media, a network of digital publications that include Fashionista, DealBreaker and Going Concern, Above the Law allows Lat the freedom to report legal news and gossip without having to coordinate the technological and sales logistics of running a commercially viable blog. The website tracks layoffs and salaries at large and midsize law firms, offers advice to out-of-work lawyers, announces industry weddings, hosts networking and social events, and publishes a stream of breaking news stories in the legal world, often bathed in a pungent, witty tone.

Fun is fun, but on the issue of accuracy Lat says he and his team stand by their reporting. “People who complain are people who didn’t want us to report something,” Lat says. And there could be quite a few of those people, as ATL has a propensity for publishing internal law-firm memos almost as soon as they are released, including those that weren’t supposed to leave the issuing firm’s offices.

William Birdthistle, an assistant professor at Chicago-Kent Law College of Law who clerked with Lat, credits the ATL blog with forcing better governance and transparency at law firms and legal institutions.

“Law firms have to be open with their constituency now,” Birdthistle says. “If the blog forces firms to respond more quickly, equitably, fairly when times are good or bad, I don’t see how you can critique that.”

Lat, who also serves as general counsel of Breaking Media in New York City, says the restlessness that first led to him blogging is gone, and he has an air of contentment about him. He also has no plans of retiring from the blogosphere anytime soon.

“Before, by day I was a prosecutor and by night I was a saucy blogger,” Lat says. “Now my day job is [being] a saucy blogger. The duality in my existence has been resolved.”