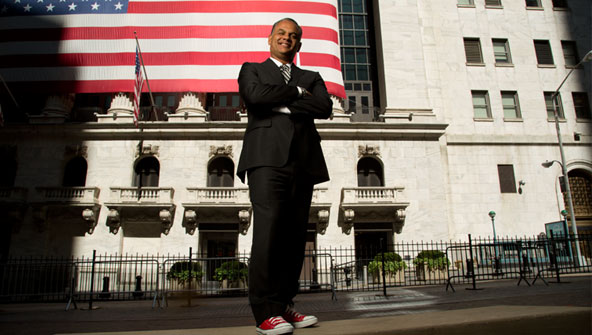 Potential clients might meet Jordan Thomas in churches, hoping to avoid sightings. Others withhold their identity during initial consultations. All are whistleblowers, and many would not have come forward before the Dodd-Frank Wall Street Reform and Consumer Protection Act.

Thomas, a former assistant director with the U.S. Securities and Exchange Commission, helped draft legislative proposals and implementing rules that were incorporated into the Dodd-Frank provisions that established the commission’s new whistleblower program. “I am proud to have helped birth the SEC Whistleblower Program; now I want to raise it,” says Thomas. “In the coming years, I predict that many of the SEC’s most significant cases will be the result of whistleblowers.”

Thomas, 42, joined the plaintiffs firm Labaton Sucharow in New York City last year and now represents whistleblowers full time. Under Dodd-Frank, eligible whistleblowers can get between 10 and 30 percent of their target’s collected sanctions. When a client has a successful case, Thomas gets a percentage of the award.

About half of his cases are referred by other lawyers, says Thomas, a 1995 graduate of Los Angeles’ Southwestern Law School and a senior officer in the U.S. Navy Reserve Law Program. Most clients are senior-level employees or individuals outside companies who have significant collaboration issues.

“In the past, people with liability would just circle the wagons—they’d never speak up,” he says. “Now they are breaking their silence in droves.” And because of the SEC Whistleblower Program, he adds, individuals with reporting duties can no longer assume it’s safe to remain silent.

Thomas also launched a website at secwhistlebloweradvocate.com, which offers general information to companies and individuals. He says he has no interest in defending companies facing Dodd-Frank violations, but he does talk with corporate audiences about how they can foster an atmosphere that encourages responsibility and integrity.

“Many organizations want to get it right. The question is: How committed are they to getting it right? Lots of organizations focus on the latest compliance trends but fail to establish an ethical culture that deters misconduct.”

Hundreds of wannabe whistleblowers come to Thomas, he says, but he only takes 2 or 3 percent of their matters. When vetting a case, he looks at the person’s credibility, the nature of the alleged violation, and their ability to corroborate the conduct in question. “Our model is low volume, high quality,” he adds. “I want people at the SEC to say, ‘If Jordan Thomas brings us a case, it’s serious.’ ”

Other lawyers who know Thomas say he won’t take a case if he does not have the whistleblower’s trust.

“Usually the cases get turned down because the lawyer doesn’t like the whistleblower or they think it would be too much work and too little money,” says Tom Devine, legal director at the Government Accountability Project. The Washington, D.C.-based nonprofit focuses on whistleblower advocacy and often does referrals.

Representing whistleblowers, Thomas says, is different than most types of legal representation. That’s why client trust is imperative.

“In many cases, a whistleblower’s attorney may be the only person the whistleblower talks to about certain thing—for years,” he explains.

Thomas has a genuine concern about clients’ personal lives, according to Devine, and that makes him unique.

“He regularly calls to confer about topics that most lawyers don’t care about, like the whistleblower’s susceptibility to dangers from the stress they face, and how it could have an effect on the person’s life and their emotional peace,” Devine says. “He’s more sensitive to the client’s best interest than the client is.”