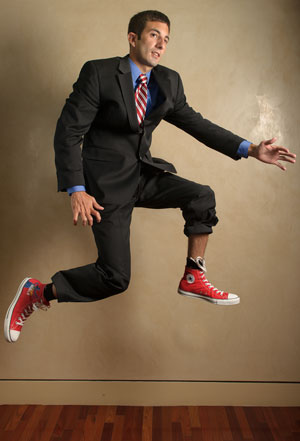 Kyle McEntee isn’t afraid to take on the institutional gatekeepers of the legal profession. As co-founder and executive director of the nonprofit policy organization Law School Transparency, McEntee is a principal catalyst behind a three-man crusade that aims to overhaul the business of legal education in the U.S.

Many of McEntee’s classmates at Vanderbilt Law School in fall 2008 clung to the idea that a legal education provided a one-way ticket to financial security. But they soon realized that premise no longer held true, especially for their counterparts at mid- and bottom-tier schools. And as economic conditions continued to deteriorate, even those at elite institutions began to wonder whether the rosy employment data they’d been given was dependable, or possibly even deceptive.

McEntee and classmate Patrick Lynch took it upon themselves to research those statistics. They incorporated LST to lobby for changes that would benefit students trying to decide whether it was in their best interest to take on massive law school tuition debt, and by 2010 they had published a white paper pointing to a problem of transparency in job data reported by law schools.

“Transparency is at the base of it all,” says McEntee, 26, now of Atlanta. “Without transparency, you won’t convince people that the beliefs they have about law school are either wrong or misplaced and can’t be trusted. But unfortunately you only get so far, because you need some outside interference with law schools to get things to change.”

Achieving the group’s goals means not only sharing heaps of detailed employment information on its website—LST’s immensely popular data clearinghouse continues to influence the decisions of prospective law students—but also targeting groups that can effect change in legal education, including the American Bar Association’s Section of Legal Education and Admissions to the Bar and the National Association for Law Placement.

“Law School Transparency started out as a hobby, but we soon realized we had to be extra careful about how we approached the issues,” McEntee says. “We had to make real partners within the legal community. My passion lies in policy work,” adds McEntee. “I like seeing the big-picture change and have a knack for figuring out how to execute that broader picture—it’s a trait Patrick and I share.”

With the help of a Vanderbilt-funded public interest grant, McEntee balanced a part-time legal aid position with the demands of the nonprofit, which increased considerably after Lynch began practicing environmental law with a nongovernmental organization in South America. Eventually, New York City lawyer and legal blogger Derek M. Tokaz joined the team. “Working with LST is a bit of a surreal experience,” notes Tokaz. “You have a billion-dollar legal education industry, which you would think more than almost any other business would have a strong moral compass. And yet when you look at how employment statistics are published or the way law schools try to game the U.S. News rankings, you see that schools are operating at the same level as used-car salesmen.”

Law School Transparency’s grant funding expired in August, and it will soon face a crossroads. The group could also take a backseat to a career choice for McEntee that will pay the rent (not to mention his law school debt).

“To continue the work of LST would take some kind of angel funding,” McEntee says, “for someone to say: ‘This is worth giving $500,000 to see what LST can do in four to five years.’ ”