Recent news reports suggest broad-based support for a major free trade agreement between the United States and the European Union. Many are confident that a pact will be concluded within the next two years—one more giant step in the ongoing elimination of barriers to an integrated global economy.

Until very recently, the American legal profession and its law schools were relatively insulated from the effects of economic globalization. That time has passed, but more explosive changes are yet to come.

The United Kingdom’s Legal Services Act of 2007 has allowed external financing of law firms through private equity and other means, and it allows nonlawyers to become partners and active participants in legal businesses. Major acquisitions of top British law firms have already begun. The American bar has resisted this development, but that position is likely to be challenged in the midst of a major press for a free trade agreement, and as U.S. law firms come to some grim realizations about the limitations of their pyramid profit structure.

Now is the moment for American law schools and the American legal profession to rethink their relationship. A massive, global transformation in the way legal services are provided is well under way, fueled by technology that breaks down borders and facilitates low-cost approaches. The biggest mistake we in the U.S. can make is to think that our objections will prevent the rest of the world from pressing forward. 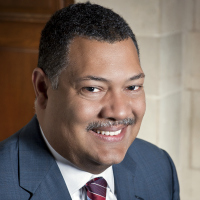 The first step is to agree on better ways to train new lawyers. Although a general consensus has emerged on the need for more experiential learning for law students, essential training for the profession cannot be left to law schools alone. Law schools and employers must work together to form highly skilled and creative practitioners who can respond to the legal needs that exist in a rapidly changing global economy and in increasingly complex democratic societies, where money, goods, and people are all on the move.

In this country, medicine provides the most obvious example of how a profession can cooperate successfully with the schools that educate its future members. I am not the only one who has pointed to medicine as a model; Rutgers School of Law-Newark dean John Farmer recently proposed the idea in a New York Times op-ed, and it is a comparison many others have made in the past when discussing legal education reform. Yes, law is different from medicine, but the professions also have much in common. Both fields have long recognized that new members need some period of training under the supervision of seasoned professionals before they can work on their own. The medical profession has institutionalized this through residency programs, while practical legal training has more often than not been left to chance.

Law schools and employers should expand their joint efforts to fashion experiential learning programs, creating direct pathways into different types of employment and providing meaningful training experiences that bring students into mentoring relationships with lawyers in practice. This could be done easily within the current three-year structure of law school, and with some minor reforms to the accreditation standards, the third year could be more broadly recognized as a bridge year to employment (some law schools, such as Washington and Lee and New York University, have already made radical changes to their third year curriculums). Apprenticeships with a modest stipend, coupled with a reduction in tuition through cost savings to schools during this third year, could ease graduates’ increasingly burdensome debt loads.

The ABA could play an important role in establishing standards for such programs and providing connections between schools and employers. In fact, ABA standards already provide structures that could be used for these partnerships. The semester-in-practice is one way for a law student to get on-the-job experience, and these placements often lead to offers for permanent employment. Even when they do not, students tend to leave them with marketable job experience. Working together, lawyers and law faculties could create new practical learning modules and externships, fostering the kind of intellectual engagement between the profession and the academy that will be required if the U.S. is to remain competitive in a global market for legal services. Technology and liberalized practice rules will continue to eliminate the need for a lot of the work lawyers used to do, but new roles for lawyers will emerge from work done in academic/professional partnerships, both in the public and private sectors.

Imagine, for instance, a research and training program on the challenges posed by the evolution of a deregulated global market environment. An international financial institution might create placements that would expose students to the legal work created by multinational regulation of its business, while at the same time offering faculty opportunities for research to produce new insights and solutions. Law schools could marshal their alumni through social media to create networks for apprenticeships and job placement. One meaningful way students could evaluate schools would be by assessing the strength and breadth of these networks. The willingness and ability of alumni to remain engaged with their alma maters through offers of training experiences and meaningful professional support says a lot about the quality of the education they received. Corporations, financial institutions, government agencies and law firms that have invested in these partnerships and training networks will have a pipeline to a highly qualified workforce that understands the world as it is and will be, not as it was.

The implications for law schools are clear. If we do not address the challenge of innovative education at a reasonable cost, we can expect further steep declines in applications. No lawyer will escape the transformative effects of technology, and few will make much of a living if they ignore the implications of globalization, which increasingly touches every aspect of daily life. Law schools ignore this at their peril.

For its part, the American legal profession, which has long been proudly parochial and deeply resistant to change, now faces a reckoning. In a world of opening borders and global economic integration, the profession cannot adhere to rules and regulations that make it difficult for lawyers to move around the country, much less the globe. Not only that, more clients are learning that they can get quality legal work done in many places around the world.

We have no way of knowing if the U.S. and the E.U. will come to an agreement on a trade deal. It may not matter. Technology will continue to evolve, and many legal jobs will become obsolete because of it. Law firms will be owned by global financial conglomerates, and whether or not they are American will make little difference. They will find ways to provide legal services at the lowest possible cost, including employing overseas workers. If we wait until we are absolutely certain change has arrived, it already will have passed us by.

Vincent D. Rougeau became Dean of Boston College Law School in July of 2011. He previously served as a professor of law and associate dean for academic affairs at the University of Notre Dame. An expert in Catholic social thought, Dean Rougeau’s most recent book is Christians in the American Empire: Faith and Citizenship in the New World Order. His current research and writing consider the relationship between religious identity and notions of democratic citizenship and membership in an increasingly mobile global order. He is currently the leader of a research group on global migration and cosmopolitanism as part of the Contending Modernities project sponsored by the Kroc Institute for International Peace Studies at Notre Dame. Dean Rougeau’s teaching interests are in contract and real estate law, as well as in law and religion. Before entering the academy, he practiced law at the Washington, D.C., office of Morrison & Foerster from 1988-1991.