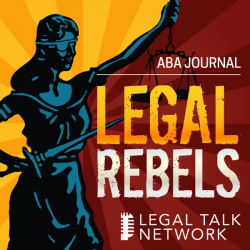 Legal Talk Network and The ABA Journal are pleased to announce the launch of the ABA Journal: Legal Rebels Podcast.

The Legal Rebels podcast will feature men and women who are remaking the legal profession. It will highlight pioneers who are changing the way law is practiced and setting standards that will guide the profession in the future.

Beginning on April 19th, listeners will have access to the show’s first four episodes, featuring a new segment of the ABA Journal’s Legal Rebels project. Legal Rebels Trailblazers will feature those who were innovating and remaking their corners of the profession well before the Journal launched the Legal Rebels project in 2009.

“I’m excited about the extension of our Legal Rebels project into podcasting. Here we can have full and frank conversations with the people who are truly making a mark on the profession, shaking up the status quo,” said Allen Pusey, the ABA Journal’s editor and publisher.

“When we launched Legal Rebels in 2009, we knew we were entering the story of the changing profession midstream. This podcast gives us a chance to look back at the people who were innovating long before we dreamed up the first crop of Legal Rebel honorees,” said Reginald Davis, the ABA Journal editor who oversees the Legal Rebels project.

Legal Talk Network is pleased to add the ABA Journal: Legal Rebels Podcast to the growing list of collaborative shows between the American Bar Association and the media network. Just last October, the ABA Law Student Division launched the ABA Law Student Podcast, joining the ABA’s Modern Law Library and Asked and Answered podcasts on the network. With the addition of the Legal Rebels Podcast, there are now four collaborative shows on the network.

“I have always loved the Legal Rebels project and couldn’t be happier to continue to foster our growing relationship with the American Bar Association,” said Legal Talk Network CEO Adam Camras. “To help bring the association’s initiatives and projects to a broadcast format and reach those lawyers who are consuming content on the go is a no brainer. We’re looking forward to producing and listening to the profiles of some of the biggest leaders in law.“

“Innovation is difficult in any industry and this especially true in law. It takes a special temperament to pave the way and set new standards. The ABA Journal: Legal Rebels Podcast puts legal trailblazers in the spotlight, giving the average attorney greater access to learn from the experiences and information these men and women share.” Legal Talk Network Executive Producer Laurence Colletti said. “This is exactly the level of high caliber content we expect an esteemed organization like the American Bar Association to bring to our listeners.”