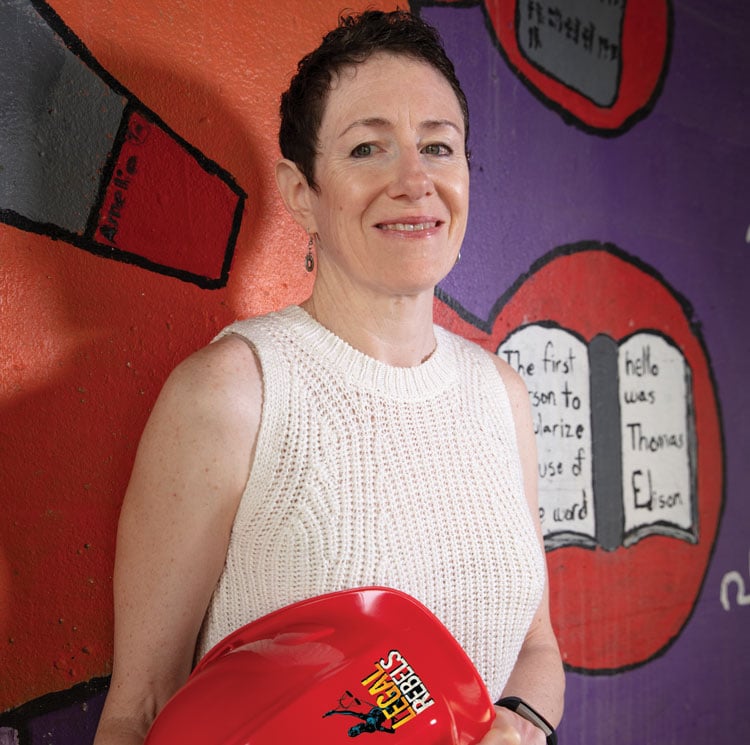 Legal technology suits Lisa Colpoys because “there’s always something new and shiny,” says the Chicago attorney who recently left a legal aid career to help build the boot camp for the Institute for the Future of Law Practice.


Set up in January by a team of legal academics and lawyers from both in-house and outside law firms, the nonprofit program trains law students in approaching law practice from a business mindset, and it places them in paid internships with employers, including corporate legal departments and law firms. It offers two types of internships: a traditional 10-week summer program and a seven-month residency that takes up both the summer and the following semester.

Since starting in March, Colpoys’ work has focused on creating curriculum, assembling the internship program and developing relationships. More than 20 employers are currently hosting IFLP interns from five law schools, Colpoys says. And this year the program had 41 students in the basic boot camp in two cities and five in the advanced boot camp.

“If someone is in-house or they are at a law firm and they know nothing about business or how their clients run their businesses, they are not going to be a productive adviser,” says Colpoys, who serves as the group’s program director.

“We’re trying to develop a 21st–century workforce lawyer, so even if students are going to practice law at a traditional firm, they will know about this technology, they are fluent in business and can talk to their clients about their businesses,” Colpoys says.

“One of the themes of everything I’ve done is that I like to build new things,” she adds. “I like the idea of changing how things are done when they are not working.” Before joining the institute, she served as executive director of Illinois Legal Aid Online, which offers statewide help for navigating all of Illinois’ county circuit courts and a platform that connects people with appropriate legal services available.

While there, she oversaw four website “redesigns-slash-evolutions,” and through the process she learned that usability testing with people who needed the websites’ services was much more meaningful than trying it out on a group of lawyers.

There’s a similar theme with the institute, Colpoys says. Clients now demand more for less and are increasingly likely to try to solve legal problems themselves, which is why the boot camp curriculum focuses on teaching skills that help young lawyers respond to clients’ needs.

“One of the things I’m passionate about is changing the system. With the institute, we are trying to improve the legal education system,” says Colpoys, a triathlete and skier who describes herself as an “outdoors and fitness enthusiast.”

She’s also the kind of person who is willing to take risks, says Marcelo Halpern, a Perkins Coie partner and former board of directors president at Illinois Legal Aid Online.

In 2009, during the height of the financial crisis, she convinced the board that the organization should add more staff so they could serve more clients.

“Some people said we were crazy, but it worked,” says Halpern, who co-chairs Perkins Coie’s technology, transactions and privacy practice. “She set the organization up for growth; and when the economy did turn, we were ahead of the curve from those who had withdrawn during the financial crisis and weren’t prepared to jump in.”

Colpoys, who has a bachelor of science degree from Rutgers, the State University of New Jersey, moved to Chicago in 1987 to work as a corporate trainer for the Bay Street restaurant chain. She later joined another restaurant group, and her work involved developing employee training manuals and handbooks with outside counsel. After the business decided to eliminate her position, she got an offer to manage a restaurant. Colpoys instead decided to go to Loyola University Chicago School of Law.

During her third year, Colpoys got a job with the AIDS Legal Council of Chicago (now the Legal Council for Health Justice), helping people with AIDS get disability benefits. After graduating from law school in 1994, Colpoys spent a few months working at a disability benefits law firm. Later, she started her own practice. She also worked part time as a hotline lawyer at the Coordinated Advice & Referral Program for Legal Services, known as Carpls.

When Susan Curry, the program’s director, left, Colpoys got her job.

“She’s very brave,” says Curry, now the director of public interest law and policy at the University of Chicago Law School career services office. “Working for the hotline, maybe the temptation of a young attorney would be to just learn how to do the job and do it. People like Lisa think about new and innovative ways to reach clients.”

Colpoys left Carpls in 2000 to go in-house with the Flat Top Grill restaurant chain, then left after nine months to be the legal content developer at Illinois Legal Aid Online. She became the organization’s executive director in 2002 and stayed in the position until April this year.

Colpoys, 54, says she started thinking about what she wanted to do next when she turned 50. Her career switch also followed her wife, Catherine Ann Schneider, being elected a judge of the Cook County Circuit Court in 2016. Colpoys was Schneider’s “de facto campaign manager.” They live in the Chicago suburb of Oak Park and have a 13-year-old daughter.

“Once she got installed as a judge,” Colpoys says, “I had some time to think about what was next for me.” The answer, it seems, is helping develop what is next for law.