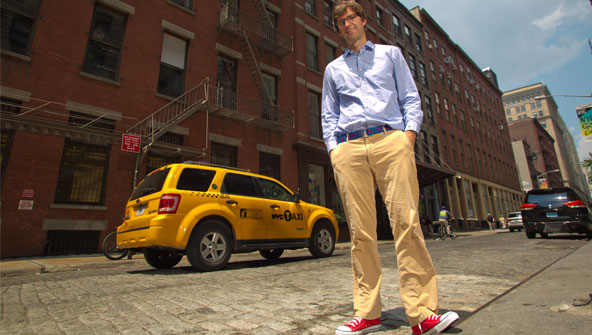 If businesses were to buy Axiom Law’s services, Mark Harris knew the offerings had to be better—and less expensive—than what law departments or outside counsel were offering.

“The central theme was: ‘Here’s a way to take the work you’re currently doing, move away from the model you’ve used, and do it in a completely different way,’ ” says Harris, 42, who founded Axiom in 2000 with Stanford MBA Alec Guettel.

Axiom’s work initially centered on lawyers providing ongoing counsel to clients. Outsourcing was added in 2008, largely inspired by the financial disruptions of the Great Recession. In 2010 Axiom introduced what Harris calls “managed services,” which entails lawyers, project managers, technologists and consultants working as a team to complete legal projects from start to finish.

The company posted revenues of $130 million for 2011. That was a 62 percent increase from 2010. Harris will tell you it hasn’t been easy. Axiom didn’t make a profit until 2003, and he went through about $45,000 in savings while it got off the ground. Today he gets pleasure from seeing his ideas come to fruition.

“I’m really excited because I feel—like never before—we are right in the middle of helping transform the way the legal industry operates,” Harris says. “That’s what gets a lot of us excited around here.”

He mentions a recent managed services project for a publicly traded consumer goods company. The business wanted to split into two companies, with the newly formed firm being publicly traded as well.

Project managers supervised a team of lawyers with varying experience levels, and paralegals, while they analyzed and categorized about 35,000 contracts. Next the team, now supervised by a senior lawyer, handled transition and execution activities, like consent solicitations and tracking down counterparties for signatures. A 10-member team of senior Axiom lawyers dealt with the more complex contracts.

The job involved about 60,000 hours of work over a 13-month period. “We saved the client about $5 million, compared to what they would have spent had they taken it to a law firm,” says Harris.

A former associate with Davis, Polk & Wardwell, Harris decided to leave the firm in 1999 amid the Internet boom and spend a few months “figuring out what I should do with my life.” Days were filled listening to various venture capital pitches. Someone asked about innovation in the legal community, and he had no answer.

“I remember thinking that in a world where everyone was trying so hard to be efficient, why did the law firms get to be so inefficient?” says Harris, who is based in San Francisco. “That was a dangerous thought that sealed my fate for the next 12 years.”

Electronic Arts, the Silicon Valley game maker, is a client. For managed discovery work, EA estimates that Axiom is about 50 percent cheaper than a law firm would be. Axiom also handles EA’s low-level consulting and nondisclosure agreements. It isn’t cost-effective to have the work done in-house, and an outside law firm would be too expensive, says Stephen Bene, Electronic Arts’ general counsel.

“They provide management support for a more effective workforce that really bridges the gap, and they keep people—so you don’t have to retrain people every three months,” he says. “Our agreements are just different enough that you really do have to have somebody who understands a little more about your business.”