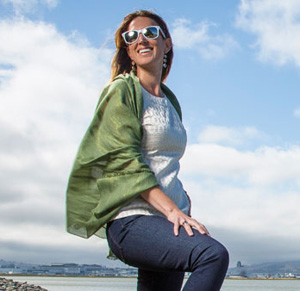 The most traumatic moment of Michelle Crosby’s life has also been her most transformative.

“My parents had one of those War of the Roses-type divorces,” says Crosby, referring to the 1989 film starring Michael Douglas and Kathleen Turner in an escalating marital dogfight that ends in double disaster. “I was on the stand when I was 9, and the lawyer asked me if I were stranded on a desert island, which parent would I choose to be with. It was horrible.”

So Crosby, 38, has made it her life’s mission to reform the divorce process.

Finding most divorces are costly, lengthy and adversarial, she turned to mediation and technology to try to remove each of those three characteristics. She spent five years as a family attorney in Boise, Idaho, working on her model and putting her clients through it. She knew she was on to something when, out of 100 couples, only one ended up having to go to court.

Crosby took that model and in December 2012 co-founded Wevorce, where she serves as CEO. Wevorce relocated to the San Francisco Bay Area one month later after being accepted into the prestigious Y Combinator seed accelerator program. It’s since secured $2 million in funding.

“We love funding disruptive ideas,” says Jessica Livingston, a Y Combinator founding partner. “The legal world is kind of antiquated sometimes and set in its ways.”

Wevorce removes the adversarial component of divorce by using its staff attorneys as neutral mediators. Where Wevorce differs from a typical mediation, however, is in its reliance on technology, neuroscience, psychology and pattern recognition.

According to Crosby, Wevorce classifies a divorcing couple into one of 18 different family archetypes. Wevorce then generates and fills out documents and formulates a process based around each archetype–for instance, if one person in the marriage managed all of the finances, then the other person would need different information and would require more educational materials than the money manager. Another archetype comes into play when one person springs a divorce on the other because, as Crosby explains, the person served with papers will likely be far more emotional if he or she didn’t see it coming.

Crosby says Wevorce doesn’t seek to treat all divorces the same way. However, there are certain steps common to all divorces, and automating them can save as much as 60 percent of what it would normally cost to get divorced. “We standardize the predictable pieces and put them in background,” says Crosby. “That way, we can focus on the unique, individual aspects of each divorce.”

Last November, Wevorce secured $1.7 million in seed money from several investors, including Foundation Capital and Y Combinator’s president, Sam Altman. As of this August, Wevorce had raised more than $2 million to fund its operation. Crosby has put the money to good use, upgrading technological capabilities while planning for a massive expansion. By the end of the summer, Wevorce plans on having at least one attorney-mediator in each of the 50 states. Crosby also says she is working on establishing a presence in Australia.

Crosby’s family includes her husband, a 5-month-old son and her two stepdaughters, ages 12 and 13. And when she’s not trying to reform the divorce process, the former triathlete and marathon runner says, she enjoys competing in equestrian events.

“Divorce is the second most stressful event you can go through” next to the death of a loved one, Crosby says. “We try to take the animosity out of it because, at the end of the day, it’s OK to stop being husband and wife, but many of them still have to be Mom and Dad.”

Asked and Answered: “How do you provide client hand-holding if you run a virtual firm? (podcast with transcript)”