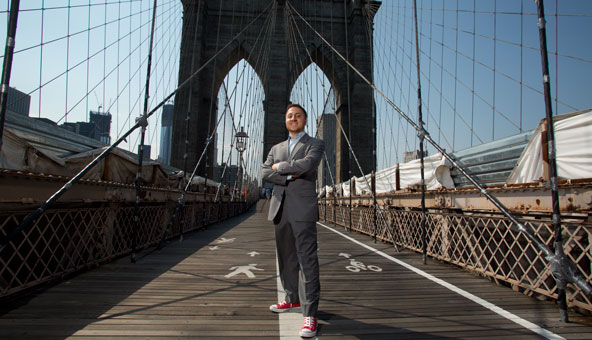 In kindergarten, Michael Moradzadeh had his first computer lesson on an Apple 2C. By the time he was 13, the Silicon Valley native had taken apart an Intel 80286 computer. His parents weren’t too happy, until they saw that his tinkering made it run faster. Two years later, in 1995, he built his first website.

Moradzadeh joined Ropes & Gray as a first-year associate in 2005, coming in with work experience from startups like Napster and Check Point Software.

At that point many of the traditional BigLaw trappings—fancy offices, large libraries and individual secretaries—were being scaled back. Perhaps because Moradzadeh wasn’t a lawyer during the leather-and-gold-leaf years, he was able to clearly see ways to practice without the pomp.

“I liked the high level of work and the people,” says Moradzadeh, 32. “Where I found room for improvement was the unnecessary bureaucracy, politics and inefficiency that led to higher costs and unhappy lawyers.”

One other asset he noticed at the time was fellow Ropes & Gray transactional associate Yaacov Silberman. The two met and became friends as junior associates at the firm’s San Francisco office. And when they both left that firm, they formed Rimon Law in 2008.

It was just a few months before the stock market crashed, and Silberman says there were signs that change was coming—partners were being pressured to bill more hours and clients were taking longer to pay.

“We knew the legal industry was gearing up for a dramatic change and we wanted to stay ahead of it,” says Silberman, also 32. “I can’t say we knew just how climactic it was going to be.”

Initially the two moved into a house in San Francisco’s Inner Sunset neighborhood. It doubled as their first office.

“We knew there was a lot of work to be done, and we needed to push each other,” says Silberman, who had his own early Web experience before law school developing content for TheLaw.com, a site for people seeking free legal advice, information, forms and referrals.

Rimon Law has no billable-hour requirements. There are no executive committees, so lawyers can spend more of their time lawyering. Many Rimon lawyers, including Silberman, often telecommute. Partners meet twice a month using videoconference software. They also use Yammer—a business-focused, internal social media site—to communicate.

“The way I like to think of technology is that it should be almost invisible,” Silberman says. “It’s nothing more than a tool to help you get your job done.”

Rimon now has 32 lawyers in six different states and Israel. Moradzadeh and Silberman are Jewish, and they knew lawyers who left the BigLaw life, moved to Israel and were looking for work. The firm also landed a number of Israeli tech firms as clients. When Rimon opened, Moradzadeh says, he knew of no large U.S. law firms with Israel offices.

Both men serve as Rimon’s managing partners. Moradzadeh handles the firm’s marketing and business development, while Silberman focuses on internal operations and infrastructure.

“I do a lot of keeping my ear to the ground,” Silberman says, “finding out what’s working and what’s not. And I spend a lot of time working with outside vendors and contractors, trying to fix problems we might be having.”

Rimon lawyers set their own billing rates with clients. According to Silberman, Rimon lawyers are paid at least 70 percent of firm revenues. Each lawyer’s percentage is set by contract, he says, so there are no compensation surprises.

“Say you’re billing $500,000 a year at a big firm. You don’t know if you will be with the firm the next year. If you bill $500,000 at Rimon, you know exactly what you will make,” says Bernays T. Barclay, who joined the firm in January. A New York City transactional lawyer, he’s practiced with five different law firms, most recently Dickstein Shapiro. Rimon makes a habit of hiring experienced partners and of counsel from other firms.

If a Rimon lawyer needs help with a client, others pitch in, Barclay says. Those helping are paid internal rates, which come out of the business originator’s percentage. “When I want to bring in a client and manage their happiness, but not do all the work, Rimon really embraces that model,” he says, adding that many big-firm lawyers hesitate to mingle clients with colleagues “because [other lawyers] will take them away from you, and you’re belly-bumping a senior partner.”

The word rimon means pomegranate in Hebrew, Arabic and Aramaic, and in some cultures it has been seen as a symbol for both law and equality.

“One reason we did not want our firm name to be our names is because we did not think it should be about us,” Moradzadeh says. “Rimon is much more than me and Yaacov.”

Updated Sept. 12 to note that Moradzadeh learned on an Apple 2C.