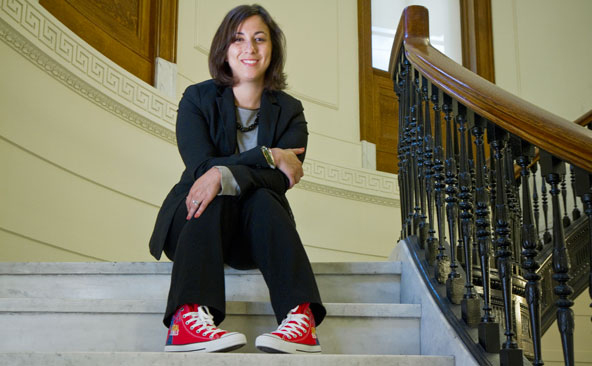 Lawyers with young children may not want full-time work, while law firms may need help but are gun-shy about hiring. Maine lawyer Nicole Bradick has found a way to bring these two groups together, with a business she calls Custom Counsel.

Founded in January, it matches lawyers available to do contract work with attorneys who need temporary help. Custom Counsel has 18 lawyers in Maine, and a Washington, D.C., branch recently opened.

The mother of two children under age 4, Bradick is also a litigation associate at Portland’s Murray, Plumb & Murray. She began telecommuting two days a week after having her first child in 2009 and now works there part time.

“Somehow I became known for figuring out the work-life balance thing, and new moms kept approaching me to figure out flexible schedules,” says Bradick, 32. “I noticed a trend for people who just seemed desperate.”

Those discussions led to Custom Counsel, which she started shortly after her second child was born.

For the most part, Bradick says, Custom Counsel clients use the service for research and writing or court appearances. The lawyers work between 10 and 30 hours a week, and their pay averages out to $100 an hour. Bradick gets a percentage, which varies according to the arrangement made with the contract lawyer.

One doesn’t have to be a parent to be a Custom Counsel lawyer, but so far most of its lawyers are.

“If you don’t have an employer who is willing to work with you, that’s where Custom Counsel steps in,” Bradick says. “You can walk away from a position that doesn’t work and do things on your own terms. It’s empowering to know there is an alternative.”

“Some of the service providers at Custom Counsel were ejected by their law firms that would not accommodate any part-time schedule,” says Thomas Newman, who heads the firm’s litigation and trial practice group. “Common sense tells you that for law firms making those decisions, they are losing out.”

Right now, Bradick says, most of her Custom Counsel clients are midsize firms. “They’ve raised partners up the ranks but they haven’t replenished the associate pool, and they need people to handle hearings and do research and writing,” she explains.

Bradick is at Murray, Plumb & Murray two days a week and works from home a third day. She spends a lot of time networking for Custom Counsel. “I am constantly at bar association events,” she says. “It’s helpful I am a practicing lawyer. Other lawyers know my work, and they can trust that I know what lawyers to send their way.”

“I omit the whole ‘mommy concept’ from any marketing message,” she adds. “For me personally it’s a mission that’s extremely important, but from the marketing standpoint I focus on the benefits of hiring a lawyer—it cuts client costs, reduces overhead and helps increase profits.”

Courtney Michalec, a Portland litigator, is a Custom Counsel lawyer. She worked full time the first year of her daughter’s life and often didn’t get home until 7 p.m. “I found that as much as I really loved litigation, I wasn’t able to come up with the right work balance,” says Michalec, who has been with Custom Counsel since it started. Now she works 15 to 20 hours a week.

At some point, Michalec wants to work full time again. “I thought this would help me keep my skills,” she says of her contract work. “It’s great to have the chance to do that and not work 50 hours a week.”