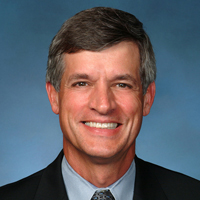 
With his messenger bag, short-sleeved dress shirts and straightforward demeanor, Ronald W. Staudt sometimes seems more like an engineer than a law professor or legal aid lawyer. That’s part of his charm, say colleagues. “He’s got a good common-man approach to things he cares deeply about,” says Marc Lauritsen, a Harvard, Mass., lawyer and technology developer who met the Chicago-Kent College of Law professor in the mid-’80s. Back then, Staudt says, other professors would sometimes suggest that, though their school was part of the Illinois Institute of Technology, he should think about something besides computers.

“He’s not your conventional lawyer; he’s down-to-earth and practical,” Lauritsen says. “But he’s also very visionary. It’s that combination of intellectual brilliance with a common touch.”

A copyright and technology professor, Staudt’s official title is associate vice president of law, business and technology. He’s also the guy who got LexisNexis online in the early ’90s. But perhaps he’s better known for his work incorporating technology with various legal aid offerings.

It’s something he’s been thinking about since the mid-’70s, when he was working for the Pima County (Ariz.) Legal Aid Society. Staudt had left private practice in 1972 to take the job, and one of the first things he noticed was that a lot of legal aid work (filling out forms and writing letters for common legal issues) was repetitive and didn’t require much thought.

He later came back to Chicago, first as a clinical fellow and lecturer with the University of Chicago’s Mandel Legal Aid Clinic. Staudt joined Chicago-Kent in 1978 as associate director of that school’s law clinic. With automated document systems, the clinic helped write wills for 500 senior citizens. He also managed a grant the school received to develop its Law Office of the Future initiative.

“I thought what would happen is that these automated documentation things would take all the routine stuff off the table. We’d need fewer lawyers, but they’d be doing more cerebral work,” says Staudt, 63. “That hasn’t turned out to be quite the case yet.”

But groups like Illinois Legal Aid Online carry on his vision. The Chicago-based agency, formed at Chicago-Kent, plays a big role in promoting long-term changes that rely on technology to make the legal system more accessible to low-income Illinois residents.

Lisa Colpoys, the group’s executive director, worked for Staudt when the group was still at Chicago-Kent.

“He’s always thinking about five steps ahead of everybody else when it comes to using technology,” she says. “He’s fun to work for because he’s always looking for whatever the next cutting-edge innovation is and how we might be able to achieve it.”

Staudt directs Chicago-Kent’s Center for Access to Justice & Technology; one of its projects is a pro se litigant software program called A2J Author. It features an on-screen avatar representing a legal assistant that asks questions about a person’s specific issue and inputs the responses into legal forms. Law students, legal aid lawyers and court personnel write the A2J-guided interviews using the author portion of the software.

“There are an overwhelming number of pro se litigants going to court, and there are a huge number of law students seeking to get legal experience,” Staudt says. “Somehow that should fit together so law students could be part of the solution.”

Ronald Staudt talks about Web technology that allows law students and attorneys to chat online with clients, from a variety of locations.

The center, working with the Chicago Bar Association, is also refining a self-help Web center at the Circuit Court of Cook County. Undergraduates, Staudt says, could help pro se litigants navigate Web resources at courthouse pro se centers. Staudt says that studies show online consumer legal sites are more effective by one-third if people using them have a human helper. That project could be in place by January 2010, he says.

Staudt built Chicago-Kent’s first microcomputer class, and when the school moved to a new building in 1992, he was instrumental in seeing that it was wired with network connections.

He took a break from academics in 1993 to work for LexisNexis, where he led the company’s first Web-based research team. Its end product, what is now known as Lexis.com, today provides about 98 percent of the company’s legal research revenue.

One of the first things he did after joining the legal publishing company was determine whether it was possible to deliver its product online. “Then the conversation was about understanding the costs and benefits of making that shift,” Staudt says. “The [LexisNexis] president had to stop seeing the Web as this competing, free and dangerous environment, and see it instead as a free channel for delivery of his product.”

When Staudt took the Lexis job, two of his three daughters were in college, which greatly influenced his decision. Much of his work involved speaking to law school deans, and he was often told that part of the job was a lot like teaching. But Staudt still missed student contact, which is why he came back to Chicago-Kent in 1998.

Showing what efficiency technology brings to the practice, he says, is part of his reward.

“He’s an educator, so he’s always trying to develop the people he’s working with,” Colpoys says. “A lot of what he’s had to do is change people’s perceptions and the way people work.”