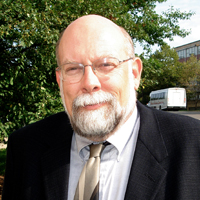 Thomas Bruce, co-founder of the world’s first legal information website, is many things.

His wife, playwright Judith Pratt, describes him as a polymath, and she ticks off an imaginary list: “He knows computers, theater, opera, woodworking tools. And although he hasn’t studied French, Italian or German since college, he can cope in those languages.”


Thomas Bruce, co-founder of the world’s first legal information website, is many things.

His wife, playwright Judith Pratt, describes him as a polymath, and she ticks off an imaginary list: “He knows computers, theater, opera, woodworking tools. And although he hasn’t studied French, Italian or German since college, he can cope in those languages.” To the legal community, Bruce and Peter Martin, co-directors of the Legal Information Institute at Cornell Law School, are the premier providers of low-cost access to black-letter law, particularly U.S. Code and U.S. Supreme Court decisions, and creators of the most-linked-to Web resource in the field of law.

“The discovery we’ve made is that there is an enormous audience and appetite for legal information that goes well beyond lawyers and the population lawyers think of,” says Bruce, 55, who isn’t a lawyer, but rather describes himself as a computer guy who wandered into a law school one day and never left.

“Legal research is like insurance,” Bruce says. “People buy insurance only up to the value of the goods they are insuring. My thought is the less expensive it is to do good, competent legal research, the lower the cost to avoid risk.” And in a field dominated by costly legal research behemoths, Bruce hopes to provide “insurance” not only to lawyers but also to everyday businesspeople.

Listen to Thomas Bruce say more on the need for low-cost public access to legal information.

“We tend to think about legal research taking place in multibillion-dollar cases,” Bruce explains, “but often it’s a dry cleaner trying to figure out how to stock chemicals.”

Bruce and Martin teamed up in 1992, looking for ways to distribute black-letter law and course materials via hypertext and the Internet before the existence of the Web. His initial step was to put the Copyright Act on Cornell University’s server, the 30th computer server on the planet and the first Web server to have professional subject matter outside of high-energy physics departments.

Bruce went on to write some of the first browsers for Windows because the early Web was largely a creation of universities running on the Unix operating system. Although quickly outpaced by the assembled forces of the software industry, Bruce remained focused on the collective dissemination of legal information.

Academic outreach to the public is a talent he inherited from his father, who was involved in a cooperative at Cornell that made university agricultural research available to farmers.

Bruce sees his own role not as a centralized source for information, but rather as an architect of an integrated system that allows anyone to access cases, statutes, legislation, statistics and analysis from lawyers already sharing their expertise on personal blogs.

“We’ve got all these ports of information,” he says. But the challenges of putting it together go beyond marrying the right technology people with the gatekeepers of legal information at the government level. Today, Bruce spends much of his time hammering out standard descriptions for documents so they can be easily searched for—and identifying the best ways different collections of information should be linked.

“We are looking at two to four years of setting standards, then a long process of adoption by creators of legal information,” he says. Bruce hopes to eventually integrate commentary, analysis and summaries of the various cases, regulations and articles, which he calls the crown jewels of a service like Westlaw.

“All of that same expertise, and in some ways better expertise, is out there in the practice community,” Bruce says. “Ultimately, this is going to get interesting because there is more commentary out there than just one publishing company.”

Bruce has a graduate degree from Yale’s prestigious theater department, and he worked as stage manager for opera and rock tours in the mid-’80s. He made the shift from the production of, say, Aida in a coliseum with live animals to management of the Legal Information Institute with ease. Perhaps that’s not surprising; as Pratt points out, “The LII doesn’t have elephants.”

And the day Bruce walked into Cornell Law School reverberates every time a client walks into a law office and says, “I read this on the Internet.”