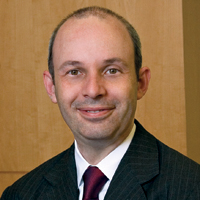 Think arguing cases in the U.S. Supreme Court is a lofty goal? Think again, says Thomas C. Goldstein, known for his business development and as someone who came to the Supreme Court bar without an Ivy League law degree, a high court clerkship or a solicitor general stint.


Think arguing cases in the U.S. Supreme Court is a lofty goal? Think again, says Thomas C. Goldstein, known for his business development and as someone who came to the Supreme Court bar without an Ivy League law degree, a high court clerkship or a solicitor general stint. Now co-chair of Akin Gump Strauss Hauer & Feld’s litigation practice, the Washington D.C.-based lawyer initially appeared before the Supreme Court as a solo practitioner after leaving an associate position with Jones Day Reavis & Pogue. But his interest was piqued a few years before.

He was introduced to the court the summer after his first year at American University’s law school. Goldstein couldn’t find a paying clerkship, but he got an unpaid internship with National Public Radio helping Supreme Court reporter Nina Totenberg. He also interned with Totenberg the following year, observing many cases.

“If it weren’t for that, I think I would have also believed in the mystique of the Supreme Court bar,” says Goldstein, 39, who has argued 21 cases before the justices. “Being there, seeing the cases and seeing the lawyers had a democratizing effect on me. There were a lot of people writing briefs and arguing cases who weren’t former Supreme Court clerks.”

The experience also brought good media connections, and in 2002 he and his wife, Amy Howe, who then practiced with him at Goldstein & Howe, started SCOTUSBlog.

“It was probably originally regarded as a flash in the pan, and I was regarded in the same way,” he says. Today, the site gets about 15,000 hits daily. “If you’re interested in anything about the Supreme Court, Tommy’s blog is about as good as you can get,” says Carter G. Phillips, a well-known Supreme Court lawyer and managing partner with Sidley Austin’s D.C. office.

SCOTUSblog has a staff of eight (some paid), and Goldstein estimates it costs him about $150,000 a year out of pocket.

The benefit isn’t necessarily direct business, as people looking for Supreme Court lawyers usually don’t find them through Internet searches. Instead, Goldstein credits the blog with things like talking-head appearances on television news programs and his recent inclusion on GQ magazine’s 2009 list of Washington’s 50 most powerful people. Akin Gump also noticed Goldstein through his blog.

A television show is in the works about the early years of Goldstein’s practice. Sony Pictures Television bought the rights to his life story and sold it to NBC. Goldstein describes the show, which has writers working on the pilot, as a legal drama/comedy.

He also teaches at the Harvard and Stanford Supreme Court clinics, and R. Bruce McLean, the firm’s chairman, says that’s opened the door for the firm to attract some great associate candidates.

“What we thought we’d get with Tom was a guy who had a fantastic representation, and his business development was very consistent with our personality,” McLean says. “He’s very entrepreneurial.”

Harvard law professor Laurence Tribe argued Bush v. Palm Beach County Canvassing Board, which dealt with ballot deadlines in the 2000 presidential election and was the precursor to Bush v. Gore. Tribe says he usually has a law student or two working with him.

“Even though [Goldstein’s] background was different from people I usually hire, when I met him I was very impressed,” Tribe says today. “His background is irrelevant. He has the intellect, judgment and insight to be absolutely first-rate. He doesn’t have an inflated ego that people with even half of his experience have.”

When talking about his Supreme Court litigation, Goldstein is self-effacing; he doesn’t put himself in the same category as other well-known lawyers who do the work. According to McLean, Goldstein doesn’t take himself too seriously, and that goes over well with clients.

“Most of the people who do what I do love sitting in the office thinking deep thoughts about the law,” Goldstein says. “That’s the least favorite part for me. I like thinking about problems, but what I really like is going out and trying to build a business, talking with general counsel about their problems.”