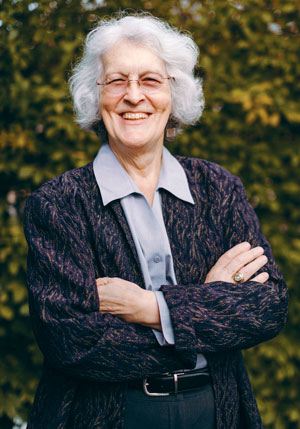 Phyllis Randolph Frye is the first openly transgender judge in the nation. There’s an award named after her at her alma mater, Texas A&M University; she’s a life member of the National Eagle Scout Association; and the New York Times has called her the grandmother of the transgender movement. This year, she and her wife will celebrate their 43rd wedding anniversary. But life wasn’t always so kind to this Houston lawyer. Frye started living as a woman 40 years ago, before the Internet, before Tootsie and Transparent, and well before Caitlyn Jenner. She endured unspeakable discrimination. She lost jobs. She faced arrest. Her neighbors slashed her tires and spray-painted slurs on her driveway. During law school, the organization of religious students she had joined even refused to pray with her. Through it all, Frye never gave up the fight—for acceptance, for opportunity, for political power and legal legitimacy.

Q. Your profile in the New York Times begins with a mention of Caitlyn Jenner. What do you think of her?

A. I am happy for her, of course, and I hope someday to get to meet her. She and I are within a year of each other in age: When she won the Olympic decathlon in 1976, that’s the year I went full time as Phyllis.

Do you have more questions for Judge Phyllis Randolph Frye? Get them answered during ABA’s 10 Questions Live, a monthly Google Hangout with innovative lawyers whose careers follow unexpected paths.

Post your questions for Phyllis at registration or live during the program and we’ll get them answered ON AIR!

Q. And also the year you became an activist!

Q. Tell me about your role in shaping the movement.

A. I was the one who put it together from a national legal and political standpoint. I created the International Conference on Transgender Law and Employment Policy. We had our first convention in Houston in 1992. Only two other out-of-the-closet lawyers came in the beginning; but there were a lot of transgender activists, and we formulated policy, published our proceedings and started lobbying Congress. I traveled to transgender events across the country to do workshops on law and politics. I’d pay for it by selling bound copies of the proceedings from the previous year’s conference and by selling T-shirts that said “Transgender Menace” for $20. I also had ICTLEP coffee mugs. I sold those for $100.

Q. After your honorable discharge from the Army in 1972, you became a civil engineer. Did your advocacy inspire you to leave civil engineering and go to law school?

A. That was an accident! I became a lawyer because I was chased out of two careers. In the fall of ‘76, I was trying to figure out what to do, and I thought, ‘I am going to use the GI Bill to go back to school.’ I decided to get an MBA because I thought I could meet other engineers who could help me get a job. That year, the University of Houston began a joint MBA-JD degree, and I thought: I can use the GI Bill for even longer. And when word gets out around the neighborhood that I’m a lawyer, maybe those mean people will finally leave us alone.

Q. Your third year, you did an internship at the Harris County DA’s office. How did that go?

A. I knew that no one was going to hire me after I graduated, so I needed to be able to feel comfortable in the courtroom, and that’s exactly what happened. But the DA was ultraconservative, and since I was coming to work dressed as Phyllis, he would only allow me to use a one-stall bathroom on the second floor. Well, I worked on the 10th floor. So if I needed to use the bathroom, I had to go downstairs and through security. I only did that twice, and I finished the semester with a bladder infection.

Q. What’s amazing to me is that, while you were so active on a national political front, you couldn’t get a job as a lawyer in your own town.

A. Even the few gay and lesbian attorneys in town wouldn’t hire me. I spent many years selling Amway brand cleaning products to gay bars.

Q. How did you finally end up with a successful law practice?

A. I became a lawyer in May 1981. I was pretty well-known in the gay community at the time, and every once in a while people would need a lawyer. In 1986 a closeted, gay, active-duty military man who got a DWI while leaving a gay bar asked me if I could take it to court and keep it out of the newspaper. He said, ‘Have you ever done this before?’ Well, I hadn’t, but I said ‘Sure! I do it all the time!’ I called one of my friends who had real experience and said, ‘Will you come down to the courthouse? I’ll pay you to sit in the hallway and tell me if the prosecutor is giving me a good deal or trying to screw with me.’ It all worked out, so I took the money and bought my first ad in the statewide weekly gay bar guide, and that’s when I launched my law career.

Q. Despite so many challenges, you’ve always maintained an unwavering self-respect and sense of dignity. Where do you think that comes from?

A. I think it had a lot to do with being an Eagle Scout and being a real achiever in high school. I have always been proud of the fact that I went to college on an ROTC military scholarship as part of a congressional program for only 200 students in the country. That does something to you—it makes you feel like maybe you are something.

Q. Was there a specific moment when you realized the movement was off and running, that the momentum was self-sustaining?

A. Around the middle of the first decade of this century, a lot more people were coming out, and gay and lesbian national organizations began to include transgender. More and more people started doing more and more of the work and doing a fantastic job. That’s when I started slowing down. I didn’t have to be out there stirring it up all the time.

This article originally appeared in the May 2016 issue of the ABA Journal with this headline: “A ‘Menace’ Mellows: In this post-Caitlyn age, one of the country’s most strident transgender advocates happily softens her stance.”