10 Questions: LA solo brings together musical lawyers in a philharmonic he founded 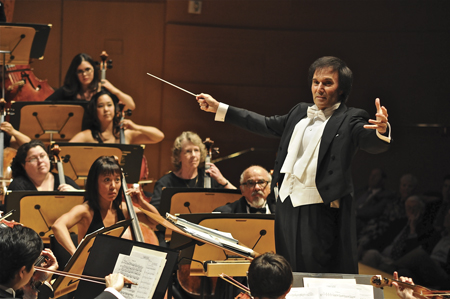 In January 2009, solo practitioner Gary S. Greene sent out a call to the legal community in Southern California. He wanted to form an all-volunteer orchestra, and he wanted it to be composed entirely of lawyers and judges. The response was overwhelming, and the Los Angeles Lawyers Philharmonic was officially established. It’s been so successful that Greene has since founded two additional musical groups: Legal Voices, a 100-member chorus, and Gary S. Greene, Esq., & His Big Band of Barristers, a Glenn Miller-style band. In June, the philharmonic and chorus performed their 8th Annual Concert Extraordinaire fundraiser, headlined by legendary entertainer Dick Van Dyke. As the founder, musical director and conductor of the LA Lawyers Phil, Greene has won numerous awards, including one proclaiming him to be “the only lawyer from whom judges take direction.”

How did you get the idea for an orchestra made up of lawyers?

My idea of a lawyers’ orchestra goes back to the 1970s. I always thought, ‘I am a lawyer; I am a musician; there must be other musicians who are lawyers too.’ Nine years ago, I was at an event where I was introduced to a judge who played trumpet, and I thought, ‘Let me put the word out to the legal newspapers and bar associations, just to see if there are other lawyer-musicians out there.’ Within a week, I had more than 100 responses, and I was amazed that on that list were people who graduated from Juilliard, New England Conservatory, Berklee College of Music, Cleveland Institute, Thornton School of Music and other music conservatories where they had majored in their instruments. When I realized we had so many advanced musicians, I knew I was on to something.

What are the lawyers like who play in the philharmonic? Are there commonalities between them?

We have people from every aspect of law—prosecutors, defense attorneys, public defenders, business and real estate attorneys, personal injury attorneys, family law and estate planning attorneys, bankruptcy, copyright and patent attorneys, corporate counsel, members of large law firms and solo practitioners, judges, justices, law students and legal staff. They are all people who have a passion for music. Many of them had tried to enter the music field; and then they realized they wanted to make a living, so they turned to law school.

I’ll bet they love being together, getting to be part of a group so dedicated to both law and music.

It’s probably the best networking organization around! We all come together once a week, and we all work together in harmony. So many people come up to me after rehearsals and say, ‘Thank you, I needed that after the day I’ve had.’ Music is a relief that allows us to go back to our offices totally refreshed. It makes us better people and better lawyers.

This article first appeared in the August 2017 ABA Journal magazine with the title "Bar and Baton: This LA solo brings together the city’s most musical lawyers in a philharmonic he founded."

Previous:
A Utah lawyer has quietly studied violence against attorneys for two decades

Next:
Standing up for our principles is all part of a year’s work