10 Questions: This young lawyer could put people behind bars before she could legally have a drink 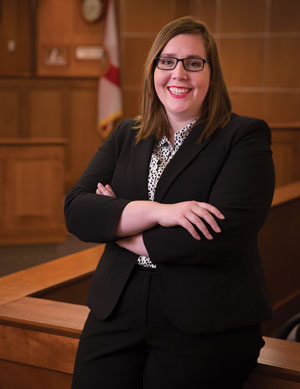 In May, Florida lawyer Robyn K. Crawford marked her first full year as an assistant state’s attorney. She is 21 years old. Yes, Crawford was handling a caseload of up to 220 files before she could legally drink a beer, and she’s both the senior-most lawyer and the youngest lawyer in the misdemeanor division of the 5th Judicial Circuit’s Citrus County office. How did someone so young go so far so fast? Hard work, of course. But Crawford has been laser-focused on the law ever since she participated in a youth court criminal diversion program for first-time offenders. At the time, Crawford was 14 and working toward her associate’s degree, which she completed two years later. Determined to be a part of the justice system, she zoomed through school, earning her BA and JD in just 4½ years. At the tender age of 20, Crawford passed the bar and scored her dream job.

Q. Why the rush to become a lawyer?

A. I was eager to get on with it and start a job. I didn’t have anything holding me back like kids or family obligations, so I was able to get it done. I graduated in April of last year, in two years and one semester.

Q. You’ve zipped through your entire educational career. Did you ever get well-intentioned, yet unsolicited remarks from people, like “You’re making a big mistake” or “You’ll regret this”?

A. I was told that a lot. I was told I was squandering my childhood. That I’d look back and regret it and wish I’d gone slower. But I feel like I got to do everything I wanted to do; it was just in moderation.

Robyn Crawford joined us for 10 Questions Live on July 28. Watch a recording of the event, which included questions submitted by readers, at this link.

Q. Has your youth ever been an issue at work?

A. It has not. Everyone in the office of course knows my age, but no one has ever brought it up. The other two lawyers who work in Misdemeanor are 24 and 26. I will tell you that when I picked a jury and did voir dire for the first time, when I stood up and thought: “Here I am, 21 years old, and I am about to present a case to a panel of older people,” it was a bit terrifying. But I took a deep breath and did it and never gave a second thought. If you are respectful to others, no matter the age, people will be respectful back.

Q. So you’ve already had your first full-blown trial?

A. I have. It was in January, a DUI. It was fun and eye-opening. It gave me a chance to put to work everything I had learned in law school and on the job up to that point.

A. I did not. It’s not normally about winning or losing, just making sure justice is done. Of course it was a little disappointing, but you can’t make up the cases; you just have to do the best you can with the facts you’re given.

Q. Have you ever had a case against someone your own age?

A. I did have one case where there were two 20-year-olds who basically destroyed the public pool at an apartment complex.

Q. Was that strange, prosecuting people who were, agewise, your peers?

A. I think it’s stranger to confront someone who is much older and has been doing the same thing.

Q. You have said that participating in youth court inspired you to become a lawyer and work with young people. Now that you’ve been a prosecutor for a year, does this still drive you?

A. Yes. I am still passionate about working with juveniles. It’s never just kids acting out. There are always other reasons behind it. With these cases, you work with people in other agencies—the Department of Children and Families, the Department of Juvenile Justice—to try to make the best decision for a juvenile who’s acting out and committing a crime. The purpose is not to punish but to rehabilitate. You can help them. You can stop them before their actions have much higher consequences.

Q. Did you ever get into any trouble as a kid?

A. I am an only child and have never been in trouble. It made getting cleared for the bar very easy! But I watched my high school friends make silly mistakes—I watched from afar!

Q. What are your ultimate career goals?

A. One day, when I’m much older, I’d like to be a judge. I think that would be a nice way to finish my career, but that’s a long-distance goal. I’ll have a pension at 53, so maybe then I’ll take a few years off and travel the world.

This article originally appeared in the July 2016 issue of the ABA Journal with this headline: “A Quick Study: This young lawyer could put people behind bars before she could legally have a drink.”