10 Questions: Want to find the next Triple Crown winner? You may want to talk to this lawyer 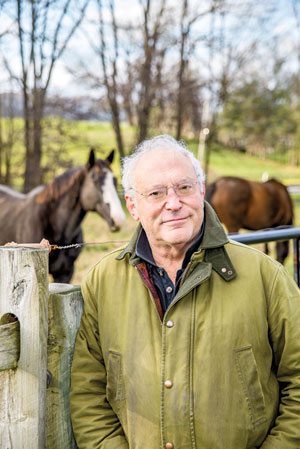 Last fall, American Pharoah galloped into history as horse racing’s first-ever Grand Slam winner. For the uninitiated, that means a clean sweep of the Triple Crown plus the Breeders’ Cup. But this legendary thoroughbred wasn’t always a sure bet. He flubbed his first race, and his owner had even tried to sell him, until Coatesville, Pennsylvania, lawyer and racehorse expert Jeffrey A. Seder intervened.

Q. Is it true you told American Pharoah’s owner not to sell him?

A. That’s true. We’d been working with American Pharoah’s owner for about five or six years. He bred this horse. He’s Egyptian, and when the Arab Spring came, his partnerships in Egypt froze his money. I suppose that’s why he decided to sell this horse—he thought he might get a million bucks for him at the yearling auction. My job is to tell him what horses to buy and what to sell, and I told him that if he needed money, he should sell his house, not this horse.

Q. The company you founded, Equine Biomechanics & Exercise Physiology Inc., applies high-tech sports medicine to racehorses. Did your evaluation of American Pharoah tell you he’d be a winner?

A. Of the very best horses—the ones with the best pedigrees, the ones that cost $1 million at auction—about 90 percent of them are no good. American Pharoah had a good pedigree, so that automatically gave him a 10 percent chance of being worth a damn. But he had passed all our biomedical and exercise physiology testing, so I knew this one was going to be really special.

Q. How did you get involved with horses?

A. When I was in the JD-MBA program at Harvard, I took a ride with a friend who had horses at a rental stable, and I became obsessed. I bought my own horse and started competing in eventing. I even wrote my senior thesis on horse racing law.

Q. Because you were into racing?

A. No. My thesis adviser was Archibald Cox of Nixon-era fame. It was late in the year, and I didn’t have a topic yet. I had to meet with him; his office was in the Harvard library’s stacks. I assumed he was going to ream me out. He said, “What are you interested in?” and I said, “Horses.” I thought: Now I am really in trouble. But he reached over and pulled out this giant book on Massachusetts racing law and said, “Do it on this.”

Q. How did you parlay your passion for horses into founding EQB?

A. I was looking for something to do with horse racing, but I had no money, no contacts. What I did have was training in statistics and management, and that led to a job doing biomechanics work with Olympic athletes. This was 1976, and the Soviet Union and the U.S. had always been competing. But then East Germany burst on the scene and won all these medals, and no one could figure out how they did it. So the U.S. Olympic Committee started a sports medicine committee with research and technical help at official training centers. For two years, I worked with the luge team, with figure skaters, track and field athletes and equestrians, until I decided to take what I’d learned and apply it to racehorses.

Q. Why did you think that would work?

A. One of the big lessons I got was that elite athletes are physically different from normal athletes. Modern medicine has a lot of data on injury and disease, but they didn’t have data on the differences between normal and elite athletes, and they didn’t understand the effects of training. So that’s what I started out doing on horses.

A. The equipment didn’t exist to do what I wanted, so I created it. I made the first small heart-rate monitor for racehorses that measured and recorded the horse’s heart rate and EKG. I also designed an ultrasonic bone scanner that won an international award and is still used today. We got a professor from MIT to help us write the code and used spare parts from defense contractors.

A. I was always sure it was going to work, even though the evidence was pretty thin for a long time. I had to have day jobs to fund my veterinary experiments, but I was too stubborn to quit.

A. Fast-forward 20 years, this is my only job, and we have a track record that is better than anyone else in the industry. We work with six of the top 10 racing stables in the country, and we make money for our clients—a lot of money. We’ve had horses that were world champions, but no one seemed to notice us before American Pharoah.

A. I want to buy a racetrack. Horse racing is stuck in the 19th century, and all the racetracks are losing money. I want to bring everything I’ve learned from my 35 years in horse racing to this business.

This article originally appeared in the February 2016 issue of the ABA Journal with this headline: “Horse Sense: Want to find the next Triple Crown winner? You may want to talk to this lawyer.”