Profit: That's a law firm's economic goal. "Profit starts with knowing your numbers," says law firm management consultant Bob Henderson of RJH Consulting in Jackson Hole, Wyoming. "And knowing when adjustments to your operations are necessary to stay on track," says Jan Friedlund Henderson, co-owner of RJH, who advises law firms on operations. Below are financial gauges for avoiding your firm's derailment.

Breakeven is the minimum. "To calculate the break-even amount, add needed expenses only," says former solo practitioner Luz Herrera. Now an assistant dean at the UCLA School of Law, Herrera also advocates "low bono" programs for new attorneys to learn law firm business basics, a tactic that got her named an ABA Journal Legal Rebel in 2009.

"Before you buy something, look at whether it's really going to help you serve clients," she says. "For example, instead of signing an expensive lease, sharing space with other attorneys or virtual offices are options that work for some practice areas." Each dollar cut is a dollar added to potential profit, Herrera says.

Aim for 33 to 50 percent profit margins. To calculate the profit margin percentage, subtract expenses from revenues and divide by revenues.

"Profit margins are indicators about the reasonableness of expenses, rates and salaries," Bob Henderson says. "Understanding that the firm size, city and market competition play roles in profit margins, generally speaking, a 40 percent profit margin is a realistic gauge, with 50 percent being ideal, though difficult, because of the increasing costs of running a business."

Specialty practice firms differ. "Plaintiffs firms, for example, typically have high overhead negatively affecting the margin because the employee-expense category needs to be ramped up to handle work before the firm gets paid," says Jan Henderson.

Know your costs. "You have to know the overhead number to earn a profit," Jan Henderson says. Taxes should be included in overhead expense calculations. A standard practice for salary and expense ratios to your revenues is the one-third rule. "One-third goes to overhead, one-third to your salary and one-third to profit," she says.

Reviewing income statements is necessary to see where the firm's money is actually coming in and going out. "Not checking profits and losses until the year-end leads to financial problems," she adds. "Employees may be busy and work is coming in, but monthly financial reviews detect when expenses for a particular category are getting out of hand. A growing office supply expense or an unproductive attorney drains profit."

Software bookkeeping options include Clio and QuickBooks for law firm financial management. "Create specific reports for specific purposes," says Linda Gross, a CPA and firm administrator for the Fleishman & Shapiro law firm in Denver. "I do weekly reports because the sooner a problem is detected, the sooner profits are protected."

And gauge spending on realized revenue, not what might be. "Historical information helps estimate case expenses, then budget accordingly," she says.

Match your staff to the workload. "What is a reasonable ratio of staff to attorneys depends on the area of law and the industry catered to for specializations," says Gross. "I generate income reports by area of law to give feedback to partners on how the firm is earning money. Salary surveys are helpful resources for market gauges.

"We're about 80 percent contingency work. We generate generally $4 million annually for a staff of 15 and seven attorneys."

"Set internal limits," she adds. "The first financial obligation is to pay off the credit line. Distributions should be taken after the line of credit is paid."

Finally, evaluate the reasonableness of firm rates. "Your firm's rates should increase to match cost-of-living increases," says Bob Henderson. And a client exit interview can measure the competitiveness of your fee, Jan Henderson adds. 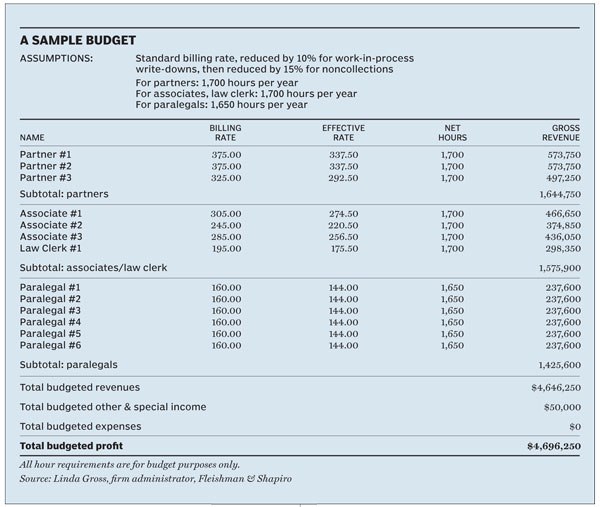 This article originally appeared in the December 2014 issue of the ABA Journal with this headline: "Budget 101: To make a profit, do the math."

Susan A. Berson is a Leawood, Kansas-based attorney and author of several finance and tax books for lawyers.