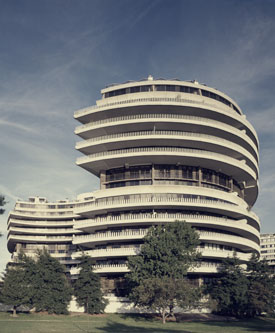 From a “third-rate burglary, ” the ABA Model Rules of Professional Conduct emerged. Photo of the Watergate Hotel courtesy of the Library of Congress.

One of the lingering questions from Watergate—the most far-reaching political scandal in modern American history—concerns how so many lawyers could have allowed themselves to get sucked into the wrongdoing that was emanating from the Nixon White House.

The short answer is that many of the lawyers working in the White House or for the Committee for the Re-election of the President—aka CREEP—never questioned the ethical implications of their involvement in the cover-up of the break-in on June 17, 1972, at the headquarters of the Democratic National Committee in the Watergate office complex in Washington, D.C. And a large part of the reason why they didn’t question their actions was that they weren’t trained to do so.

“In 1972, legal ethics boiled down to: ‘Don’t lie, don’t cheat, don’t steal and don’t advertise,’ ” said John W. Dean III, one of the lawyers brought down by Watergate with President Richard M. Nixon, during a 2012 interview with the ABA Journal for an article about the legacy of the scandal.

“When I took the elective course in ethics at law school, it was one-quarter of a credit,” said Dean, who was White House counsel at the time of the break-in and went on to provide key incriminating testimony to the Senate Watergate Committee. “Legal ethics and professionalism played almost no role in any lawyer’s mind, including mine. Watergate changed that—for me and every other lawyer.”

In October 1972, Dean pleaded guilty to obstruction of justice and served four months in federal prison. He spent much of that time testifying in the trials of other lawyers charged with Watergate-related crimes. Of the 69 people ultimately implicated in the scandal—48 of whom were eventually convicted of crimes—Dean has noted that 21 were lawyers, including Nixon himself, along with two attorneys general, two White House counsel, an assistant attorney general and more than a dozen other high-level members of his administration.

Before Watergate, lawyer ethics were governed largely by a vaguely worded set of platitudes that hadn’t changed much in 80-plus years. Ethics, if taught at all, was an elective class in law school. Lawyers were under no professional obligation to brush up on the subject. And the law governing lawyers was still in its infancy. 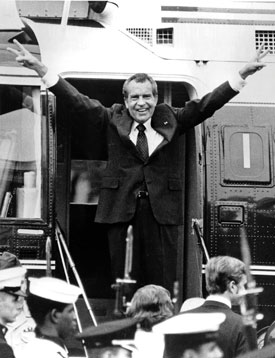 Richard Nixon boards a helicopter outside the White House a day after resigning. AP Photo

But the sight of so many lawyers shamed so publicly provoked an outcry—and even calls for federal regulation of the legal profession—which the organized bar and law schools responded to in a number of ways.

The ABA Section of Legal Education and Admissions to the Bar, which is recognized by the U.S. Department of Education as the accrediting agency for U.S. law schools, started requiring schools to teach ethics. The National Conference of Bar Examiners developed the Multistate Professional Responsibility Exam, which law school graduates in all but two states are required to pass before they can be admitted to practice. And states began to require lawyers to include ethics in their continuing legal education.

The Model Code was a huge improvement on the 60-year-old canon of ethics it replaced, which tended more toward moral exhortation than rigid, enforceable rules. But while the adoption of the Model Code was hailed as an important step in the increasing transformation of legal ethics from “fraternal norms” into “judicially enforced regulations,” the code itself was soon criticized on a number of grounds. And threats of antitrust action by the U.S. Department of Justice helped persuade the ABA to begin a wholesale revision of the code.

The Model Rules essentially set forth black-letter rules followed by often lengthy comments designed to provide guidance for practicing lawyers. One of their most important elements entails a stronger emphasis on issues of client confidentiality, including when it is appropriate for lawyers to report wrongdoing by their clients.

“Today’s rules would have had a dramatic impact on my decision-making back in 1972,” said Dean, who spends much of his time giving presentations on legal ethics to law firms and bar groups. He has given thought to seeking to regain a law license. “All of the Watergate lawyers who wanted their license back have gotten it,” he said. “I don’t know that I want to practice law again. It’s more about redemption.”