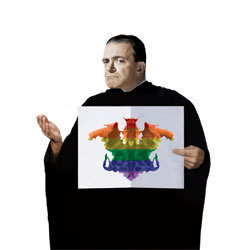 In the early 1970s, the American Psychiatric Association declared that homosexuality was not an illness. As a result, many mental health providers declined to use “sexual-orientation change effects” therapy, designed to dissuade gay and lesbian clients from homosexual desires.

Yet some therapists continued to use SOCE, mostly with nonaversion methods like hypnosis or reframing clients’ thinking.

But the state of California passed a law prohibiting such therapy with minors, claiming that any provider doing so would have committed “unprofessional conduct” and become subject to discipline.

In August, the 9th U.S. Circuit Court of Appeals at San Francisco upheld the law, turning down a challenge that the statute violated the First Amendment because it prohibited therapists from expressing particular viewpoints about same-sex sexual relationships.

Instead, the appeals court ruled, gay-conversion therapy with minors was proscriptive conduct.

The law “bans a form of treatment for minors; it does nothing to prevent licensed therapists from discussing the pros and cons of [sexual-orientation change therapy] with their patients,” wrote Judge Susan P. Graber for the unanimous three-judge panel in Pickup v. Brown.

“We further conclude that the First Amendment does not prevent a state from regulating treatment even when that treatment is performed through speech alone,” Graber wrote, referring to the law as having only “incidental” impact on speech.

“This decision clears the way for this life-saving law to protect California youth from cruel and damaging practices that have been rejected by all leading medical and mental health professional organizations,” said Shannon Minter, legal director of the San Francisco-based National Center for Lesbian Rights, in a press statement. Minter argued the case before the 9th Circuit on behalf of Equality California, a nonprofit LGBT advocacy group.

“The court of appeals ruled in very clear terms that state-licensed therapists do not have a constitutional right to engage in discredited practices that offer no health benefits and put LGBT youth at risk of severe harm, including depression and suicide,” he added.

By contrast, Brad Dacus, president and founder of the Pacific Justice Institute in Sacramento, disagrees. “The fallacy of the 9th Circuit decision is that the speech is the conduct,” says Dacus, whose organization represented the plaintiffs in one case that was consolidated into Pickup. “The legislation is so overreaching and the 9th Circuit’s decision sets a dangerous precedent.”

The case hinges in part on the speech/conduct distinction, which often surfaces in First Amendment jurisprudence. Courts sometimes decide free speech cases by emphasizing whether the expression at issue is more speech or more conduct. For example, in the 1968 draft-card burning decision, United States v. O’Brien, Chief Justice Earl Warren wrote in his majority opinion: “We cannot accept the view that an apparently limitless variety of conduct can be labeled ‘speech’ whenever the person engaging in the conduct intends thereby to express an idea.”

The Supreme Court has used the O’Brien test when speech and nonspeech elements are combined. Sometimes the court employs a threshold test that asks whether the speaker intended to convey a particular message through the expressive conduct and then, if so, whether people would reasonably understand such a message.

“To be sure, the speech/conduct distinction is often unsatisfying,” says University of Colorado at Boulder law professor Helen Norton. “Even so, courts have long upheld legislative regulations of doctor-patient communications to protect patient health and safety; for example, by prohibiting doctors from prescribing a banned drug or from delivering negligent medical advice.”

“I think the 9th Circuit panel’s analysis is correct,” says Leslie Gielow Jacobs, a law professor at the University of the Pacific. “It’s really no different than if the California legislature had banned a type of physical treatment for gay conversion, assuming one existed.

“A parallel seems to me to be [a federal law] that bans female genital mutilation. If there were some sort of counseling-like therapy designed to change a girl … to suppress a sex drive, it seems the legislature could decide that the ‘talk therapy’ is not medically sound and ban it, just as Congress banned the physical change.

Another constitutional law expert disagrees. “Playing the old ‘conduct-not-speech’ card is something that judges do when faced with particularly thorny speech issues,” says Kevin F. O’Neill, a professor at Cleveland-Marshall College of Law. “I don’t find it persuasive here, but it gave the 9th Circuit a convenient basis for applying rational-basis review.”

“The statute singles out a particularly ludicrous treatment—a ‘medical’ treatment that is grounded upon ignorance and hostility toward gays and lesbians—and simply bans it,” O’Neill says. “But the ugliness of the treatment doesn’t provide a constitutional basis for banning it.”

He notes that the Supreme Court invalidated “efforts to ban some of the ugliest speech ever” in the prohibition of images of animal cruelty in U.S. v. Stevens (2010) and violent video games in Brown v. Entertainment Merchants Association (2011).

The 9th Circuit case consolidated two federal district court decisions that reached different results on the constitutionality of the law. In December 2012, U.S. District Judge William B. Shubb temporarily blocked the law. His reasoning was that the California law affected speech based on the content and viewpoint of the speech. In Welch v. Brown, Judge Shubb determined the law must be evaluated under strict scrutiny.

The very next day, U.S. District Judge Kimberly J. Mueller rejected the plaintiffs’ request for a preliminary injunction. In Pickup, she noted that courts “reaching the question have found that the provision of health care and other forms of treatment is not expressive conduct.” Judge Mueller determined the law was subject only to rational-basis review.

The plaintiffs in both cases contended that the law violated the First Amendment because it prohibited therapists from expressing particular viewpoints about same-sex sexual relationships. Government officials defended the law as a reasonable way to regulate a dangerous method of treatment and a form of unprofessional conduct.

“We are hopeful the full 9th Circuit will hear the case,” Dacus says. “If this is unsuccessful, we likely will file a writ of certiorari to the U.S. Supreme Court. I believe we would have a good chance.” O’Neill says he believes there is a possibility that the conservative wing of the Supreme Court could vote to accept the case.

“I think [the justices] would be inclined to strike this statute down under strict scrutiny as a content-based restriction on protected speech.”

This article originally appeared in the January 2014 issue of the ABA Journal with this headline: “Change in Orientation: 1st Amendment at issue in ban on gay-conversion therapy for minors.”