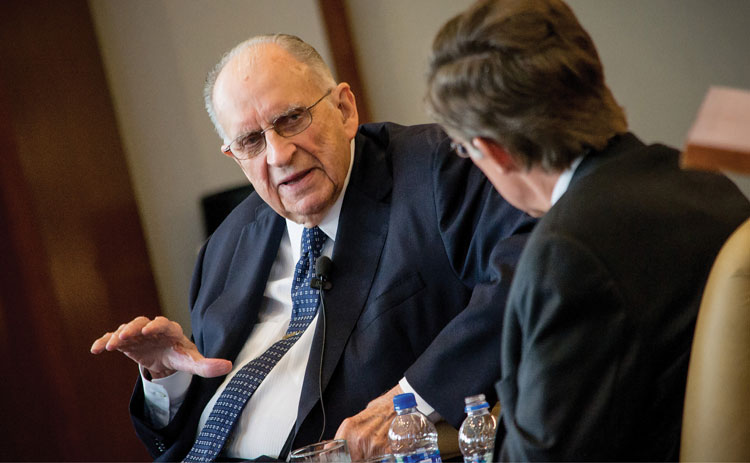 On May 23, Chief Judge Priscilla Richman of the New Orleans-based 5th U.S. Circuit Court of Appeals convened an unusual en banc hearing. It was to celebrate the life and judicial contributions of the late Judge Thomas M. Reavley, who was a member of that court from 1979 until his death in 2020 at the age of 99. He was the oldest sitting federal judge in the country. Before his federal service, he had spent nearly nine years on the Texas Supreme Court. He was universally considered a wise and careful judge.

My Reavley clerkship was the most rewarding year of my professional life. The experience locked into place important principles of conduct and of judging. Although I’ve never been a judge, I’m a serious student of judging. I’ve taught judicial writing to courts in about half the states and in several of the federal circuits. When teaching that subject, I emphasize four principles Reavley taught.

If you’ve read this far and have started to conclude that this column is for appellate judges but not others, please bear with me. Every lawyer can benefit from the Reavley principles.

Make sure you’re well-informed not just about the parties’ contentions but also about the record.

All the legal and factual contentions must be understood in light of the record. Ideally, a judge or a trusted clerk must read the record from beginning to end. You say that’s not possible in a high-volume court? You may be right, but it’s certainly possible (and should be expected) in any appellate court that has discretionary jurisdiction. In a high-volume court, the relevant excerpts, normally supplied jointly by counsel, should be scrutinized.

For the advocate, this principle means that you must rely on the actual record, not your recollection of it. Once again, that means reading the record. But there’s another part of the principle: You must be well-informed about your adversary’s contentions. Just as people who rely on memory may skew their understanding of ascertainable facts, they may skew their understanding of their adversary’s positions.

It’s hard to listen sympathetically to an adversary, but that’s precisely what good lawyers learn to do—before pouncing on the real (not the imagined) jugular.

Make sure that everything you’ve said about the record is utterly honest.

If there are inconvenient facts, you mustn’t brush them away with rhetorical flourishes. Yes, judges have been known to do that. A paragon on the bench will deal with these facts candidly—even if doing so might alter a desired result.

In a 1982 memo to law clerks, Judge Reavley wrote: “Beyond any other cause, judges most often err because of an inadequate understanding of the record. If you misstate the record or twist the effect of the evidence, I will be humiliated.” He added: “If you are working with me on a particular opinion, you are responsible for the absolute accuracy of the citations and quotations there.”

It’s no surprise that advocates might be inclined to fudge uncomfortable facts, whether consciously or unconsciously. Once that’s discovered by a court, though, the advocate’s credibility plummets. So it’s a good idea to have rigorous fact-checking. The best practice, when possible, is to have someone other than the writer check the facts. That’s how the ABA Journal and other reputable publications do it. There’s no reason a lawyer, whenever possible, shouldn’t approach it the same way.

Write your opinion with the losing side in mind.

OK, this is a judge-specific principle. The idea is that the winning side will inevitably be happy enough with the result—unless it’s some kind of Pyrrhic victory. The ideal judge cares that the losing side knows that their positions have been understood. They should know why they’ve lost. Ideally, they’ll be convinced that their case was decided by judges who are diligent, wise and humane. That’s how we build respect for the rule of law.

This idea of respecting the loser is one reason why humor in opinions is so difficult to handle well. Unless it’s deftly and gently executed, the loser may well conclude that (a) the judge spent more time going for laughs than arriving at a sound decision; or (b) if the jollity is at the loser’s expense, the judge is simply callous. People who have staked their claims in court want to be taken seriously.

Write no more than necessary. And make your prose so clear that a smart high school student could follow what you’re saying. Doing this engenders respect for the law and the courts. In Reavley’s view, judges should avoid trying to restate the law within a field. Leave that to the law reviews. And even though the judges are supposed to know the whole record in a case, they should exclude almost all of it from their opinions. The idea is to include only facts that illuminate the analysis. The Reavley approach is to state the central problem clearly, decide the case cleanly, give reasons briefly and be done.

Judge Reavley blamed legal education for the loquacity to which so many lawyers are inclined. He warned his clerks: “Students are taught to look for every issue they can connect to a given set of facts or contentions, and then to pursue every argument of which they can conceive. The result is a clutter that neither enlightens the listener or judge nor persuades.”

He used an analogy to America’s favorite pastime: “No detours, no distractions. Think of a baseball diamond: Stay on the base path to first and second and third and then home base. … You must outline or lay out your bases. Most lawyers seem to use the parts of the briefs required by the rules for their only outline: statement of the case, the facts, the issue and the argument. From there, they just write and write and write. Seldom will you read a brief where the writer has thought and pared and shaped her writing to take the reader by the hand onto the playing field and down the base path.”

Every lawyer with any experience has encountered colleagues at the bar who see no problem with adding more material to a brief or its appendixes. The ancient rhetorician Quintilian spoke against this practice nearly 2,000 years ago: “We must not always burden the judge with all the arguments we have discovered, since by doing so we shall at once bore him and render him less inclined to believe us.”

The point is that attention is a scarce resource, in a judge’s chambers as elsewhere. Writers are foolish to presume that it’s always in ample supply. Readers will rebel by turning their attention to other things. It happens all the time.

Whenever I’m writing, I always try to keep the Reavley principles in mind. Even though Judge Reavley wasn’t much interested in grammar, he taught me more about legal writing than anybody else.

This story was originally published in the August/September 2022 issue of the ABA Journal under the headline: “Judge’s Rules: The four Reavley principles.”

Bryan A. Garner is the chief editor of Black's Law Dictionary and the author of The Elements of Legal Style (2d ed. 2002), among other books. Follow him on Twitter: @BryanAGarner