4 vignettes lead to a single moral about writing better briefs 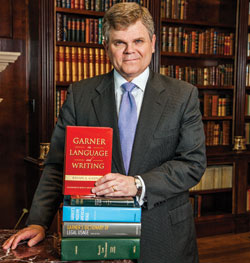 No. 1: In the mid-1980s, I was working on a brief with the legendary Dallas appellate lawyer Marvin S. Sloman. We had just acquired new “laserjet” printers that gave us the ability to use several fonts other than Courier, a font that mimicked the look of Royal and Underwood type-writers of a bygone era—a cruder look, even, than the IBM Selectric typewriter of the 1960s.

Marvin was a man of exquisite taste and discernment —alternately charming and gruff, and often pretty intimidating. (His standard answers to queries of any kind were barks of either “Of course!” or “Of course not!” No one could accurately predict which it would be.)

In preparing for one oral argument, Marvin used the word flaccid, which he pronounced /flas-id/. I suggested it should be /flak-sid/—that all the usage authorities and pronunciation experts recommended a hard “c.” He asked me to produce evidence. When I did so, he dismissed the experts I cited and called me an “old fogey” (I was 27).

So back to the brief. “Why don’t we use a better typeface—something more readable than Courier?”

“Of course not! We wouldn’t want the court to think we took any pains in making the brief look attractive. Make it look like it was produced on a typewriter. We should win with our arguments, not pretty pages.”

We filed it that way.

No. 2: By 1991, I had left my old firm, served on two law school faculties and founded LawProse. I hired my first secretary at LawProse, Ruth. She was the best typist I’d ever encountered, and she seemed overqualified in many ways. I was 32, but I had written two books for Oxford University Press. Now I was in the business of training lawyers to write smarter-than-average briefs and draft clearer contracts. I was also preparing my first advanced judicial writing coursebook.

Ruth came into my office: “Bryan, we need to talk about something. You’re putting two spaces between sentences.”

“Of course I am.” (Could it be that a bit of Marvin Sloman had rubbed off on me?)

“I’m sorry, Bryan, but you’re really wrong about this.”

“Look, this is the most elementary point of typing. I learned it from Mrs. Galloway in 7th grade.”

“Look, Ruth, I don’t even want to discuss this. Two spaces in this office. Understood?”

“Not really, no. Our coursebooks are going to look amateurish.”

“OK, Ruth. I’ll show you you’re wrong. And then I don’t want to hear another word about this.”

“Look at your own books, sir. Oxford puts one space after a period.” She showed me. I became livid. Oxford had never asked me about taking this license with my manuscripts. Yet I hadn’t noticed, even though I’d spent dozens of hours poring over page proofs for each book.

Noticing the veins in my forehead, Ruth calmly told me not to be upset with Oxford. She said my publisher had just wanted my books to have a modern, professional look. Her assurances hardly assuaged me.

I did what I would still do today: I went through an extensive reference library to prove Ruth and Oxford wrong. But every reputable source I could find, including The Chicago Manual of Style, supported them—not me.

I felt every bit as disappointed as I had when my father told me, at age 10, that the Harlem Globetrotters weren’t really winning all those games against the Washington Generals: All the plays had been arranged in advance.

It took two days to accustom myself to hitting the spacebar only once. Today I feel a very mild revulsion at seeing two spaces after a period. And slight pity. But I understand the strong feelings of those who persist.

No. 3: One of my consultancies was with the Judicial Conference of the United States on the Federal Rules of Appellate Procedure. Rule 32, on the requirements for briefs, was being thoroughly, substantively revised.

The chief author of the new Rule 32 was Judge Frank Easterbrook, a brilliant judge and astute aficionado of typography. He was eager to eliminate page limits (favoring word counts instead) and monospaced fonts (favoring proportional fonts such as Caslon or Palatino). Before sending out the new rule for public comment, the Appellate Rules Advisory Committee heard testimony from professional typographers. They were aghast and perplexed at the ugly, outdated conventions lawyers were using in their briefs. The committee members found their testimony convincing, and we put out a draft rule expressing a preference for proportional serif fonts—discouraging Courier and other monospaced fonts. The committee’s reasoning: enhanced readability.

A firestorm of correspondence ensued—more controversy than I’ve seen generated by any other single rule change. Federal district and appellate judges demanded that the rule express a preference for Courier. Although we suspected there must have been a campaign, we couldn’t deny that the sentiments were deeply felt. We thought them to be ill-informed, especially after the expert testimony we’d heard. We knew those very judges would be put off by having to wade through books or newspapers printed in their beloved Courier.

Perhaps, though, they had been victims of lawyers who in the 1980s squeezed 70 pages’ worth of material into 50—cramming type onto the page with the not-so-creative reduction of proportional fonts to 11 points or even 10.5. That sort of thing was common then. The judges came to think that the only thing they could trust was the old-fashioned pica type: 10 characters per inch.

In the end, the committee made 14-point type the national standard—but with the equal option to use a monospaced font. The objecting judges seemed placated, and Rule 32 has proved a success.

No. 4: Do you know the word mumpsimus? It comes to us from medieval England. Here’s the story: There was a monk—call him Anselm—who habitually misrecited one of the Latin prayers. Where the text called for sumpsimus (“we have taken”), Anselm would always say mumpsimus. After a time, Anselm’s brethren corralled him: “You keep saying mumpsimus. … Look, here’s the prayer book.”

“I don’t care,” Anselm replied. “I’m not trading in your new sumpsimus for my old mumpsimus.”

Anselm gave us both the word mumpsimus and its definition: One who continues perpetrating a clear error even after irrefutable correction.

One example is a president who continues mispronouncing nuclear after being told it’s /new-clear/, not /new-kyuh-lurh/. I once asked ex-chief of staff Andrew Card whether time was spent in the Oval Office on the pronunciation of the word. He dodged answering at first, saying that President George W. Bush prided himself on his folksiness. “But was the pronunciation actually discussed?”

The Moral: Psychologically, it can be extremely difficult to avoid “mumpsimism.”

How can the legal profession do better on questions of typography? How can we make improvements that might entice readers—judges as well as clients?

Fortunately, we now have a source ready at hand: Matthew Butterick’s Typography for Lawyers. This compendium capsulizes all the major teachings on document design—teachings that can be easily learned.

I asked Butterick which reforms most urgently press upon the profession today. He said that the typewriter has been a terrible influence on digital documents generally and legal documents in particular. To be fair, many lawyers learned to type on a typewriter and absorbed its conventions. But most of them—underlining, double-spaced lines, double hyphens in place of long dashes—were compromises dictated by the typewriter’s mechanical limitations. Computers don’t have these limits, so the old ways have no place in digital documents.

What are the most backward conventions in briefs? Butterick and I put our heads together:

• Overuse of all-caps. Capitals are fine for less than one line of text, but after that, they’re tiring for readers.

• Using initial caps for point headings, which should be full sentences. They should be downstyle boldface. And lawyers often overlook one of the most effective forms of emphasis: putting more space above and below a heading.

• The page limits that are still part of many court rules. These should be replaced by word limits.

And the worst conventions in contracts?

• Caps for contract text that is required to be “conspicuous.” The 9th Circuit has rightly noted that “lawyers who think their caps-lock keys are instant ‘make conspicuous’ buttons are deluded.”

• Small margins and wide lines. The ideal length of a line of text is 45–90 characters. If you need to maximize the number of words per page, use two columns.

• Underlining headings that should merely be boldface. Is there room for disagreement on these matters? Of course.

This article originally appeared in the January 2014 issue of the ABA Journal with this headline: “The Tyranny of Typewriters: These 4 vignettes lead to a single moral about writing better briefs.”

Bryan A. Garner, president of LawProse, is editor-in-chief of Black’s Law Dictionary and the author, most recently, of Quack This Way, featuring David Foster Wallace.