7 steps for producing top-notch text with a co-author 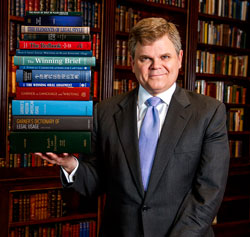 Although I once collaborated on a translation (turning a gobbledygook original into The Rules of Golf in Plain English, with Jeffrey Kuhn), I had never collaborated in writing a book from scratch before proposing such a project to Justice Antonin Scalia. The result was our first work: Making Your Case: The Art of Persuading Judges (2008). Just as we were finishing, I suggested another: a treatise on textualism. Now that we’ve completed Reading Law: The Interpretation of Legal Texts (2012), I better appreciate the nature of successful collaboration. Let me explain how we worked together, in hopes that there may be lessons for other collaborators.

Three prerequisites: First, both collaborators must have an abiding interest in the subject. Second, they must have literary styles that readily mesh. And third, they must like and trust each other enough that they can work through their differences. None of these is easy, but all are necessary. Given those ground rules, let me explain seven steps that prove indispensable in collaborating.

1.) Canvass the existing literature. Too few writers really master the existing literature on their subject, so their own writing suffers from underdeveloped ideas and neglected sources. Your ideal should be to learn the literature better than anyone ever has. Only then can you ensure that you haven’t overlooked certain points supporting your argument or points that need refuting. What if these points have been addressed in many writings over the years? So much the better. Better still if you find writers from all over the world.

Scouring so many sources, you’ll need a systematic way to take notes. Search for two things: (1) main principles that you can express in your own words; and (2) supporting quotations that you might use later to develop your analysis and explanation. Be patient: Reading through 20 books may yield only a single thought worth citing.

On the first point, the problem that confronted Justice Scalia and me with both books is that the subjects—advocacy and interpretation—have been voluminously written about, from ancient times to the modern day. With Reading Law, canvassing the literature was particularly arduous: Our shortened bibliography consists of 610 books and 999 articles, filling 42 pages in the 567-page book. (We culled dozens of less pertinent or less sound sources.)

On the second point, Justice Scalia and I highlighted topical quotations throughout Making Your Case, in shaded boxes interspersed throughout the book. I first assembled about 4,000 from more than 1,500 sources and then whittled those down to 400. Together we selected 83 and decided where they would fit in the book. All came from original sources—spanning many centuries —and we provided pinpoint citations for each.

2.) Write out your main propositions. Figure out your main points. Phrase them as assertions—in concrete language, as if you were preparing a restatement for the American Law Institute. On legal subjects, the restatement (at its best) is among the highest literary forms. It derives from the format of the better hornbooks of the 19th and early 20th centuries: a black-letter statement followed by explanatory text. All my recent books use this format.

The Scalia-Garner books are no different. We spent six months developing the table of contents for Making Your Case—just getting the black-letter injunctions into proper order—before penning a single paragraph. With Reading Law, we spent the better part of a year settling on the valid canons of construction. My first draft contained more than 170. In the end we agreed on 57 valid canons—as well as 13 false notions to debunk.

I recommend first writing out the propositions you know from memory, and adding others while embellishing, elaborating and subtracting from the formulations as you conduct your research. This process may take anywhere from a month to a year for a book, maybe more. And you do all this before ever writing a paragraph.

3.) Arrange your propositions into categories, and put those categories into a sensible order. The more thoroughly you immerse yourself in your subject, the more easily a sensible order will come to you. You may get frustrated and think the material is intractable. But every creative achievement is preceded by a period of feeling stymied.

If you look at Making Your Case, you might think that the categories are entirely intuitive and obvious: General Principles of Argumentation, Legal Reasoning, Brief Writing, Oral Argument. In fact, this simple organization took months of experimentation to arrive at.

Reading Law was far more complicated. It was never obvious just what these diverse canons of construction had in common. Being well familiar with the existing literature, Justice Scalia and I were dissatisfied with the various organizations our predecessors devised. So we struck out on our own with this fresh arrangement:

Within these categories, we moved individual canons around right up to the final week. We’d discover new relationships while editing—nuances that we hadn’t noticed before reviewing our full commentaries.

Three days before our book went to press, Justice Scalia called with bad news. One of our canons was misplaced, he said: The repealability canon should be under Government-Structuring Canons, not Expected-Meaning Canons. “Oh well, we can change it in the second edition,” he said. Luckily, though, because the pages were being typeset in my office, we were able to get that last-minute change into the first edition. It’s gratifying when you’ve snapped things into an eminently sensible order.

Remember to stay flexible: Valuable architectural adjustments may occur to you right up to the last moment.

4.) Ideally, co-authors should write the same parts of the manuscript simultaneously. Working with an eminent co-author has potential pitfalls. I was concerned that if I wrote the first drafts, Justice Scalia might react to my writing without applying as much fresh imagination as he otherwise might. And if he did the first draft, I might be too deferential, also using less imagination. We decided instead that we’d both do first drafts of the sections at the same time, working only from the section headings. Neither knew what the other might say.

For Reading Law, we worked a little differently. We each wrote in support of whatever sections our research prompted us to write about that week. By now we trusted each other as co-authors. We knew that we almost always reacted favorably to what the other wrote, and we were confident that excessive deference or cramped imagination would not be an issue. Still, whenever possible, I’d work on sections that I knew Justice Scalia was working on—just to ensure the thoroughness of our research and to keep our approach fresh.

5.) Have one team member meld the two versions into one. In every collaboration, it’s critical to know at all times who maintains control of the master version. In my work with Justice Scalia, that was almost always my responsibility. We kept the master at LawProse in Dallas; and when Justice Scalia added text to an electronic version, I would edit the additions and enter them into my master version. This melding of drafts worked beautifully. When we wrote sections simultaneously, I would use almost every word that either of us wrote, combining paragraphs here and there and adding connective words as needed to maintain the flow. If Justice Scalia wrote five paragraphs and I wrote four, we might end up with an eight-paragraph section—some paragraphs mine, some his and some blended.

6.) Spend plenty of time revising the draft, amplifying here and diminishing there. The published version of Reading Law was revision No. 216—and that’s counting version No. 1 as a draft that was almost complete. Once we did have a complete draft, we spent more than 200 hours working side by side.

Sometimes it would take us the better part of an afternoon to compose a few particularly difficult paragraphs. I would arrive in Washington with several tough problems that we hadn’t yet confronted. I’d pose each problem, challenging Justice Scalia to write about it—sometimes prodding him with irksome quotations from contrary authorities. I did this especially with points that I had trouble drafting myself and about which I had difficulty predicting what his views would be. Often we’d disagree at first, debate throughout the day, pose hypotheticals to each other, cite and discuss authorities—and reach a consensus by day’s end.

In both books, Justice Scalia cut (or tried to cut) much of what I had written. He seemed terrified that either book might become bloated. So I had to justify many, many paragraphs. When I couldn’t justify them to his satisfaction, he cut them. That hurt. A lot. At first. But in the end, I became reconciled to the cuts. When I absolutely insisted on including something, he usually relented—after rewriting it.

It’s fair to say that each of us rewrote every single sentence in both books. Today, neither of us can tell who initially wrote many passages.

7.) Reconsider everything. It’s often said that you should first do half your research and draft your argument, then test your argument against the second half of your research. I like this approach. You’ll find things that support or color your arguments up to the end. For example, I discovered relevant works by Cesare Beccaria and R.W.M. Dias only in the final month before Reading Law went to press. Look up those authors in the index to see what an important role they both played in the final text. By researching and revising up to the very last moment, you ensure that you haven’t overlooked anything. You must discover whether anyone has ever convincingly refuted your arguments. And if these contrary authorities are unconvincing, seize the opportunity to say why. It also helps to have a team of skilled, experienced fact-checkers. Both Scalia-Garner books were complex enough that we followed a protocol of fact-checking each other’s work—but also of having four lawyer-editors verifying every quotation and citation.

Although I’ve talked here about books, these principles might help with other types of writing—especially briefs, speeches or articles. It helps to have collaborators with fully developed literary styles—who, for example, fret about continuity in prose, understand that the punch word should fall at the end of a sentence, and begin a fair number of their sentences with conjunctions. It helped that Justice Scalia and I both consider ourselves stylists. By collaborating, we may well have ended up with a style superior to what either of us would have produced individually.