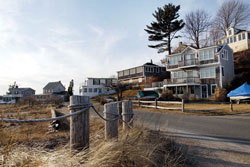 When 17th century merchant William Payne bequeathed (PDF) land for the benefit of a public school in Ipswich, Mass., he unwittingly set the stage for a court battle that would split the town 350 years later.

Upon his death in 1660, Payne placed a seaside pasture into what now appears to be the nation’s oldest land trust. He decreed the approximately 35-acre parcel should “remain to the benefit of said school of Ipswich forever,” adding, “said land not to be sold nor wasted.”

That last part is the source of a modern-day ruckus in the town of 13,000 about 30 miles north of Boston. Trustees—“feoffees” in the language of the ancient trust—who want to sell the land are squared off against a group of local residents determined to block the deal.

It’s the latest chapter in a legal feud that has raged for six years, inflamed by allegations of mismanagement and self-dealing. Media around the country have picked up the story, which poses several legal questions, including when trustees can disregard a grantor’s instructions, and who can assert the rights of beneficiaries in court.

Could Payne have imagined any of this when he created the trust 40 years after the Pilgrims landed at Plymouth Rock? Not likely. He wanted to ensure funding for the local school and apparently figured the fees paid by farmers who grazed livestock on the land would do the trick.

View the original document (PDF) or read the text.

The waterfront pasture now known as Little Neck has since morphed into a summer home community where cottage owners lease lots from the trust.

Trustees have come under fire in recent years over their handling of the property. A town investigation in 2002 concluded that rents were too low and noted some trustees also rented lots at Little Neck. So the trustees raised rents, triggering a lawsuit by Little Neck tenants.

The case was settled with an agreement to sell Little Neck to the tenants for about $30 million. The sale “maximizes the return” to trust beneficiaries, says William Sheehan, attorney for the trustees.

Since the deal would violate Payne’s no-sale clause, the trustees sought a court order approving it. Some local school parents now seek to block the sale, arguing it undervalues the property and wrongly overrides the grantor’s wishes.

The settlement “allows a sale of the land that is detrimental to the schoolchildren,” says Catherine Savoie, attorney for the parents.

Denied standing to intervene in the case late last year, the parents have appealed. If they win standing, the case will turn on complex principles of trust law and factual questions such as Payne’s purpose in setting up the trust, and whether a sale would hinder or advance that objective. Those questions could be rendered moot, however, if the sale proceeds as planned by May 1.

“This is a great case—if they can get into court,” says Ronald Chester, a professor at the New England School of Law in Boston.