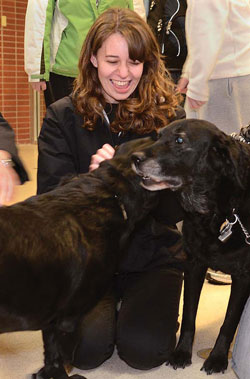 When Jenni Parrish, library director at the University of California’s Hastings College of the Law in San Francisco, heard about Monty, the 11-year-old Jack Russell-border terrier mix who served as a therapy dog at Yale’s law library (see “Going to the Dogs,” ABA Journal, August 2011), she wondered whether there was a similar way that animals could help her own stressed-out students, particularly during exams.

After consulting a colleague at the University of San Francisco, which had similarly hosted therapy dogs, Parrish engaged the services of the San Francisco Society for the Prevention of Cruelty to Animals’ Animal Assisted Therapy program, which sends more than 100 volunteers, with their own animals, to hospitals, senior and youth centers, psychiatric centers and similar facilities.

Initially, Parrish was concerned about potential liability issues. “But fortunately, the powers that be at Hastings are all dog people, so they were predisposed to say yes,” she recalls. The Library Dog Therapy Program was launched during last fall’s exams. “Students signed up immediately. It was just fabulous.”

Not unlike Hastings’ student body, the therapy dogs were “totally diverse,” Parrish says. Students cuddled with large and small dogs, old and young dogs, purebreds and mixed breeds. Each pooch worked 90 minutes, with students coming in groups of three or four every 10 minutes.

To be friendly to people with allergies, the dogs were brought to a designated library study room via the freight elevator. After each visit, the room was vacuumed and wiped down. The program proved so popular, the SPCA’s therapy dogs returned for spring exams.

“You don’t normally see a lot of law students walking around happy during exam time,” Parrish says. “So their smiles with the dogs were the best indication of this program’s success.”