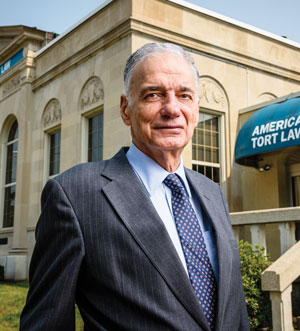 Scalding-hot coffee, exploding cars and dangerous toys are catnip to plaintiffs lawyers, but do they appeal to regular people, too? Ralph Nader thinks so, and he's out to prove it with the American Museum of Tort Law. Housed in an old bank building in Nader's hometown of Winsted, Connecticut, the museum was scheduled to open in late September.

Nader first proposed his idea for a tort museum in 1998, and despite the passage of time and fundraising challenges, the 81-year-old consumer advocate (and frequent presidential candidate) says this type of institution has never been more relevant. “It couldn’t come at a better time,” he says, “with the monumental concentration of corporate power globally over government, labor, technology and capital.”

Plus, it’s interesting stuff. “People have a real curiosity about torts,” says Nader, who serves as the museum’s president. “Part of that is that they love to watch courtroom scenes—look at Judge Judy’s audience—and part of it is that it relates to their lives.”

Yes, Nader’s heard the cake jokes before. But he believes that having “tort” in the title will get people talking—and wanting to know more. “You want people to ask,” he says. “No one asks about a civil justice museum.” What was never on the table: anything that included Nader’s name. “It’s contrary to my public philosophy,” he says.

Visitors to the museum will be introduced to an array of important cases ranging from precedent-setters such as the T.J. Hooper barge lawsuit to major consumer safety advocacy actions involving asbestos and tobacco to headline-grabbers like the McDonald’s coffee case. There will be an actual Chevrolet Corvair on display, along with a collection of perilous playthings that Nader calls “Toys that Kill.”

The level of human drama is high here, and that’s part of the appeal, says executive director Richard L. Newman, who came to the museum this summer after a successful career as a plaintiffs trial lawyer in Connecticut. “That’s why it’s going to be an eye-opening experience,” he says. “People will see how law and these cases have really changed life for the better.”

To turn complex cases into engaging, interactive displays able to be understood by an eighth-grader, Nader turned to Eisterhold Associates, a Kansas City, Missouri-based museum design firm. The challenges were many, says firm president and creative director Gerard Eisterhold: complicated fact patterns, missing or inaccessible supporting materials, fuzzy historical records and the sheer difficulty of showing someone not doing something. The ultimate goal, he says, wasn’t to teach tort law but rather to expose visitors to the idea that tort law is a living, breathing thing. “We’re trying to convey a gestalt,” he says.

Nader hopes visitors will leave the museum inspired to take sides and discuss what they’ve seen, “in terms of what’s just, what’s unjust, what are the rights of different parties, how far should accountability go and how far should compensation go.” (And should they want to leave with a book or a DVD from the gift shop, that’s great, too.)

Although the museum doors are now open, the fundraising continues. Nader says he still needs millions more to move forward with plans for phase two, an expansion that will include a fully wired courtroom, facilities for more robust Web and media capabilities, and additional exhibit space. Nader and Newman envision hosting public events and professional seminars, and they hope one day to secure funding for traveling educational exhibits.

“It’s a resource problem,” Nader says. “The ideas, the concepts, the excitement—it’s all there.”

This article originally appeared in the October 2015 issue of the ABA Journal with this headline: “A Dream Come True: Ralph Nader opens his American Museum of Tort Law.”