Lenore Cobbs, Denise Bradford and Maire Larkin (l to r) are staff members of the Children’s Waiting Rooms at the San Francisco civil courthouse and the Hall of Justice. Photos by Norbert Von Der Groeben.

When self-employed contractor Robert Hayden was called for jury duty in April in San Francisco’s civil courthouse—just days after his wife went back to work from maternity leave—he wanted to fulfill his civic duty but didn’t know who would care for his infant daughter.

Luckily, during voir dire he learned of the Children’s Waiting Room, a courthouse facility that cares for kids whose parents have business in the courts.

“It was a huge, huge, huge worry off my mind. The facility was clean and safe. If it wasn’t great, I wouldn’t have brought her back the next day,” recalls Hayden, who was buying chocolates for the Children’s Waiting Room caregivers when reached for this interview. “They were hands-on and active.”

The room was opened in 1998 and is modeled on one that was opened at the San Francisco Hall of Justice seven years earlier. That room—the first in the nation to be funded by private donations and operated by nongovernmental agencies—is celebrating its 20th anniversary.

Founded in 1991 by the San Francisco Women Lawyers Alliance and operated by the Northern California Service League, the waiting room was also the first of its kind in a Bay Area courthouse. The founders had to overcome huge bureaucratic hurdles. Among them: finding appropriate facilities, answering liability concerns, and finding funding to effectuate their desire to protect children from unpleasant court proceedings when a parent is serving as a witness or juror, or has other court business. 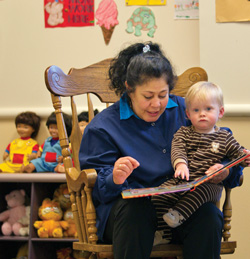 Norma Alvarez reads to a child whose parent is conducting court business.

Before the Children’s Waiting Rooms, kids were often left unsupervised in the halls, disrupting court operations. Though the Hall of Justice facility was launched with $25,000 in private donations, California’s legislature passed a law in 1999 that helped fund similar waiting rooms with filing fees. Long Beach’s Kids’ Place, for instance, recently celebrated its 50,000th child visit, and this year Santa Barbara opened its first waiting room.

At the San Francisco civil courthouse, the children’s room is exempt from day care licensing because parents remain on-site. Last year, nearly 2,000 children were cared for there, according to Denise Bradford, who has served as director since 2002. She’s assisted by San Francisco City College students who volunteer and earn early childhood education credits. Bradford’s team can take 15 kids at one time—from newborn to age 17.

The waiting room at San Francisco’s criminal division, while accommodating fewer kids, offers services that include accompanying children to visit parents in jail.

Foreign judges often visit the civil courthouse facility to use it as a model in their own countries, according to Bradford, who takes pride in the facility’s cleanliness. Its wall is decorated with thank-you cards from parents. Family law commissioners, along with the sheriff’s department, raise extra funds to keep the room supplied with snacks, games and furniture.