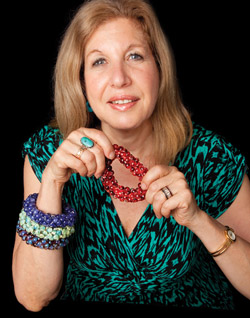 Lauren Wachtler has been a commercial litigator for 31 years, but it wasn’t until recently that her job included tasks like marketing jewelry.

Wachtler, a partner with Mitchell Silberberg & Knupp in New York City, is the legal mind behind Same Sky, a 3-year-old organization that is dedicated to helping impoverished women help themselves out of poverty by giving them skills and a job.

“The idea was to empower the women economically,” Wachtler says. “Same Sky has given them a new lease on life, so to speak.”

Same Sky’s inaugural project is based in Kigali, Rwanda, where the group helps fund a business that employs some 75 HIV-positive women who survived the 1994 genocide. The women involved in the project create glass-beaded bracelets.

The artisans earn a wage that is 15 times greater than the average wage of women in sub-Saharan Africa, plus a hot meal and a transportation stipend for traveling to and from work, Wachtler says. Even though the Rwandan government provides free HIV medication, access to the drugs can be limited, she adds. The women’s income enables them to pay for transportation to obtain the drugs, as well as food so they can take their medication on a full stomach.

The bracelets are sold for $30-$160 online (samesky.com) and in boutiques in cities including New York, Houston and Las Vegas.

Wachtler became involved with Same Sky through her friend and client Francine LeFrak, who founded the project. Wachtler says LeFrak’s passion for helping the women of Rwanda, many of whom were infected with HIV after being raped during the genocide, inspired her to get involved. “I saw what she was doing to help these women, and it sounded like such an ambitious and wonderful endeavor,” says Wachtler. “This was her dream—to give people a hand up, not a handout.”

Ever the fan, Wachtler makes sure never to leave home without one of the group’s bracelets on her wrist. “I have one in every color. They look like candy,” she says. “I wear one every day.”