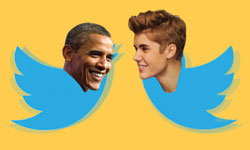 But if a lawsuit filed by the microblogging service has any merit, a lot of those followers may not be real. Twitter is suing a handful of companies that it claims are violating its terms-of-service agreement by, among other things, selling followers.

According to a recent study by e-security firm Barracuda Labs, followers can be purchased on eBay and other websites for as little as 18 bucks for 1,000 followers.

But the company discourages manufactured followings. The site isn’t designed to crown users with the most followers, and tweets that are solely a form of spammy marketing or other inorganic relationships can become a disproportionate load on cyber-resources. As Barracuda Labs concluded, the booming “underground business” of buying followers “erodes the overall value of the social network.”

Twitter’s lawsuit, filed last year in a San Francisco federal court, claims the defendants violated its terms-of-service policy, which prohibits “using or promoting third-party sites that claim to generate more followers … including sites promising ‘more followers fast’ or any other site that offers to automatically add followers to your account,” according to the complaint in Twitter Inc. v. Skootle Corp.

But enforcing those terms of service may be “quite tricky,” Goldman says. “How do you prove the purchase of followers? And how can Twitter, the plaintiff, prove that it has been harmed?” Twitter did not respond to requests for comment, nor did representatives for Skootle.

Goldman insists that Twitter’s beauty is that it embraces the marketplace mechanism, so the phony-followers controversy is a bit of a tempest in a teapot. “If you provide value, you will find an audience. Having lots of followers who don’t respond doesn’t help anyone out. To what effect is having millions of followers if no one’s listening? It’s about the content, not about followers.”