By Dan DiPietro and Gretta Rusanow 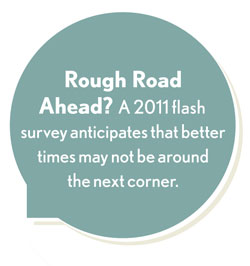 Authors DiPietro and Rusanow ended the Citi Private Bank Law Watch quarterly flash survey on 2011 legal industry financial statistics with an upbeat “all said, not a bad year.” But that rosy assessment gathers some shade in a historical view of the mainly large law firms that participated.

In the 2011 flash survey, DiPietro and Rusanow report revenue for the legal services industry grew 4.1 percent for the year, certainly a step up from 2010’s 1.3 percent. Yet both were well below the 10.9 percent compound annual growth rate for revenue rung up during the period from 2001 to 2007. Further, the 2011 survey showed expenses grew at a higher percentage than revenues—4.4 percent—while the 2010 survey showed an expense decrease of 2.2 percent.

Those statistics also colored the 2012 Client Advisory (PDF) issued by the Hildebrandt Institute and Citi Private Bank in late winter. Noting the “economic malaise” that’s hit legal services since mid-2008, the advisory declares “the best way to describe the overall economic prospects of the industry—at least in the near term—is ‘uncertain.’ ” It says demand for legal services, equal to total billable hours for the reporting firms, increased 0.2 percent in 2010 and 1 percent in 2011. 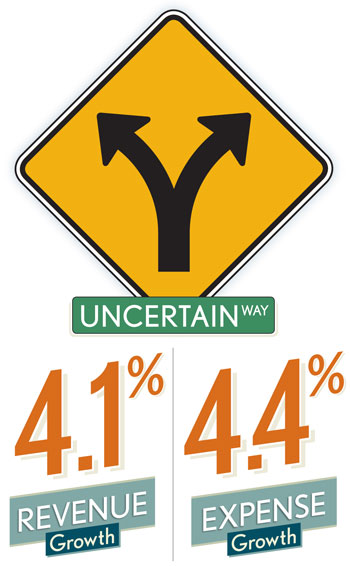 Results for the 2012 Client Advisory came from 116 law firms reporting to the Thomson Reuters Peer Monitor and included 45 Am Law 100 firms, 41 from the Second Hundred and 30 other firms. Also participating in the advisory report were James Jones, senior fellow at the Center for the Study of the Legal Profession at Georgetown University Law Center, and Hildebrandt Consulting founder Brad Hildebrandt.

The advisory cited slowed demand in the second half of 2011, especially in corporate and transactional practices. Expense growth (despite cuts in headcount since 2009) came from both increased compensation for fee earners and overhead costs, including purchases that had been deferred during previous cost cutting.

And whether one sees the reported revenue results as improvement over 2010 or still disappointing from past boom years, the 2011 Law Watch flash survey anticipates that better times may not be around the next corner. Those results, the survey says, are “likely to be the new definition of a good year for the legal industry at least for the foreseeable future.”