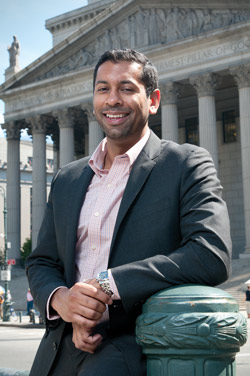 Consider these two words as a new glimmer on the dark horizon of the ever-expanding e-discovery world: predictive coding. The thinking machine’s answer to manually sifting through hundreds of thousands of e-documents for a few shreds of evidence, predictive coding shoulders e-discovery grunt work at speeds that can be blazing—and with results that are reportedly at least as reliable as document reviewers.

“There has been a long-standing myth in the legal field that exhaustive manual review is the gold standard, or nearly perfect, but that has been shown to be a fallacy,” says Maura R. Grossman, counsel at Wachtell, Lipton, Rosen & Katz in New York City. “Humans manually reviewing large numbers of documents for responsiveness make errors.

“Research has shown that, under the best circumstances, manual review will identify about 70 percent of the responsive documents in a large data collection. Some technology-assisted approaches have been shown to perform at least as well as that, if not better, at far less cost.”

In fact, Grossman recently released research (PDF) with co-author Gordon V. Cormack, a computer science professor at the University of Waterloo in Ontario, that concluded software using a predictive-coding approach can do a better job of sifting through more than 800,000 documents than humans.

More than a few respected law firms are intrigued and have begun to slowly embrace the technology, which best ferrets out sensitive e-documents with the help of a seasoned law pro at the helm.

Essentially, the software works by delivering results based on a barrage of keyword inputs, which are tweaked by a seasoned attorney who then continually refeeds the best resulting documents back into the system as examples until the software “learns” what the attorney is really looking for.

Sanjay Manocha, CEO of New York City-based Landmark Discovery, says, “The predictive coding technologies that we utilize … are very effective at prioritizing documents for review, i.e., identifying document groups that are largely responsive, which should be reviewed early on, and separating those from document groups that are largely non responsive, which should either be reviewed in later stages or be subject to culling.

Manocha’s firm uses predictive coding software from Equivio, a firm out of both Kensington, Md., and Rosh Haayin, Israel, that describes itself as “dedicated to the problem of managing data redundancy.”

But the technology’s use at law firms is still so new, many question its legal defensibility, although that mindset is beginning to change, according to Craig Carpenter, vice president of marketing at Recommind, a predictive-coding software provider based in San Francisco.

“What often happens is that both sides will essentially agree that one or the other or both will use predictive coding, and that that’s fine with both sides,” says Carpenter, whose firm licenses its software at $650 per gigabyte of data searched. “It doesn’t make it defensible, but it makes the potential defensibility not an issue at all.”

Perhaps the only worrisome facet in this new wave of search is that a machine is now promising to do the same work that was previously the realm of entry-level new hires. More than a few fresh-out-of-law-school types are probably wondering: Is predictive coding my friend, or should I stick a pencil in my computer fan?

In a perfect world, one would hope predictive coding will free up scores of freshly scrubbed new esquires to wave goodbye to document review drudgery and immerse themselves in much more fascinating aspects of the law.

But even if some of the least experienced attorneys find themselves out of work because of predictive coding, Carpenter assures that the impact will be limited to attorneys at e-discovery service providers overseas.

“If you’re a contract attorney reviewer offshore,” Carpenter predicts, “you will lose your job.”