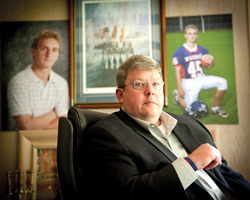 Steve Stuban at home in the room where Nick’s mom, who has Lou Gehrig’s disease, spends most of her time. The hearing that preceeded Nick’s suicide was “aversarial to an extreme,” Stuban says. Photo by James Kegley.

At 15, Nick Stuban was by all accounts a good kid. He was a Boy Scout and played on the football team at his Fairfax, Va., high school. Nick did well in school. He had never been in any significant trouble.

He also helped out at home by caring for his mother, Sandy, as she battled Lou Gehrig’s disease.

And then one day Nick bought one capsule of a synthetic compound called JWH-018 at school. The compound mimics the effects of marijuana but was legal at the time.

But Fairfax County Public Schools has a strict disciplinary policy regarding weapons and drugs. When questioned by school authorities, Nick admitted his action and apologized.

In November the school held a disciplinary hearing. Nick’s father, Steve, along with Sandy and her nurse accompanied Nick to the hearing with a feeling of nervous confidence. Steve Stuban says an administrator discouraged him from bringing an attorney to the hearing. A lawyer, the administrator said, would make the proceeding unnecessarily confrontational.

Instead, it was a disaster, Stuban says. It lasted about an hour and a half, and was “adversarial to an extreme.”

“They were badgering him and impugning his integrity. It brought him to tears, had me in tears, my nurse in tears. Sandy was visibly distressed.”

As a result of the hearing, Nick was transferred to another school. On Jan. 20, he committed suicide, six days after starting there.

“I thought with Nick’s record, with this being a first-time infraction and with the fact he possessed something that they didn’t even know what it was, surely they couldn’t throw the book at him,” says Stuban, sitting in his home surrounded by pictures of his son. “I was warned that a lawyer would make the proceeding unnecessarily adversarial, so I didn’t pursue any legal advice at that time.”

In retrospect, Stuban believes a lawyer would likely have helped the family understand the seriousness of the proceeding and help prepare Nick’s defense.

Brent Pattison, director of the middleton center for Children’s Rights at Drake University Law School, says he has seen dozens of cases in which a school’s disciplinary proceeding fails to conform to fundamental concepts of fairness, such as maintaining impartiality.

“In any of these hearings, there are supposed to be procedural protections to help ensure fairness. In addition, the school discipline decisions can’t be arbitrary or capricious,” Pattison says. “But often, schools are either unaware of specific due process requirements or they are aware and just failed to do them. And how can parents and students enforce those rights when often they aren’t even aware of them?”

School disciplinary hearings are considered quasi-administrative legal proceedings. In 1975, the U.S. Supreme Court recognized in Goss v. Lopez that students facing such discipline have a right to due process.

Generally, due process in more serious cases—where the outcome can be long-term suspension or expulsion —has been determined to include fair notice, the right to an attorney, and the opportunity to present witnesses and evidence. Beyond that, states, local jurisdictions and school systems can provide additional guidance and procedural rules.

According to children’s advocates, parents of students facing more than a short-term suspension should consult with an attorney the moment they receive notice of a disciplinary proceeding. Of particular concern is that a school hearing often triggers a parallel proceeding in delinquency court. Statements made by a student in a school hearing may be subpoenaed.

“These school proceedings can have tremendous ramifications, and a lawyer provides the best protection,” says Thalia González, a politics professor at Occidental College who specializes in juvenile justice issues.

School disciplinary hearings can be far more serious than they were a few decades ago. In the 1980s and 1990s, parents concerned about drugs and violence insisted that schools act swiftly against anything potentially associated with gang activity. In addition, high-profile school shootings, including the 1999 massacre of 12 students and one teacher at Columbine High School in Colorado, have prompted schools to usher in strict zero-tolerance programs, bearing severe consequences, even for first-time offenders.

Andrew K. Block Jr., director of the child advocacy clinic at the University of Virginia School of Law, says the more a school adheres to a zero-tolerance policy, the more important it is to hire a lawyer for immediate advice because second chances or light punishments are less likely results. But parents often can’t afford a lawyer or are concerned that school officials will react negatively to a lawyer’s presence.

William Reichhardt, a lawyer in Fairfax who specializes in education issues, says he has seen numerous cases in the local school system in which parents were specifically told not to hire a lawyer. “They are told that it is an informal, free-flowing discussion and a lawyer gets in the way.”

Paul Regnier, spokesman for the Fairfax school system, declined to comment on the specifics of the Stuban case. However, speaking generally, Regnier said that “a lawyer can come in at any time.”

“Parents can do what they want. We neither support nor discourage the use of a lawyer at any level in the disciplinary process,” Regnier says.

But Daniel A. Domenech, executive director of the American Association of School Administrators and a former superintendent of the Fairfax school system, says bringing a lawyer to a hearing “can make the process adversarial.”

Block says a lawyer doesn’t have to come barging into the hearing. Sometimes the best thing a lawyer can do is to advise a family how to approach the process and prepare for the best presentation. A lawyer who specializes in school disciplinary cases would likely know applicable law for the process, including the parameters for questioning witnesses and reviewing evidence.

A lawyer can also help parents ensure that the disciplinary proceeding is being conducted impartially, and that a complete and accurate administrative record is established in case the student has to go to court.

“A lawyer can advise on everything from how you should dress and looking a person in the eye to more complicated issues like evaluating the risk of admitting responsibility,” Block says.

Students are sometimes questioned about an incident without parents being notified. In Nick’s case, he was questioned twice—and even wrote a confession expressing regret—before his parents were notified.

“Schools seem to make an effort to question a child in school, most often even with a police officer present, before contacting parents,” says John W. Farrell, a lawyer who specializes in education law at McCandlish & Lillard in Fairfax. “They bring an officer in for intimidation purposes, claiming that a right to counsel hasn’t attached. What it leaves parents with is a sense of helplessness. They come to believe that schools are out to destroy their child.”

Regnier questions whether any system could be effective if it required parental notification before administrators could ask questions about a routine incident at a school. “To call their parents before you even ask them what happened? I don’t think anybody wants that to be the way things are done,” he says.

Child advocates also express concern that schools may not be meting out appropriate punishments. Nick, for example, was given a mandatory transfer from one high school to another and barred from his former school’s premises, even during school-sponsored events.

However, according to state statistics, few other Virginia school systems impose forced transfers as frequently as Fairfax.

Regnier points out that students change schools all the time when they move: “This is not a terrible life-changing experience if you look at it from a broad perspective.”

But the Stubans say the transfer kept Nick away from his friends and his main support system. “His school transfer devastated him,” says his mother.

Zero-tolerance policies and mandatory punishments continue to get media coverage. In May, a teenager in Maryland was hauled off in handcuffs after school authorities found in his lacrosse bag a pen knife used to repair his lacrosse stick. In numerous cases, children have been suspended for taking Tylenol, aspirin or other over-the-counter medications during school hours.

Reports from organizations like the American Psychological Association challenge the effectiveness of zero-tolerance policies. “A range of professionals who work with children are slowly coming to remember that individualized decision-making is far superior to a one-size-fits-all approach,” says Block.

And lawyers, in addition to offering advice in individual cases, are increasingly becoming involved in grassroots organizing, helping communities petition their local school boards and even their state legislatures.

“Throughout the country, there are community-based lawyers working very closely and collaboratively with parents and students to make changes to school discipline policies on both the district and school level,” González says. “We are seeing shifts away from zero-tolerance policies toward alternatives that allow more flexibility.”

González and others have been pushing for alternatives to zero tolerance, such as a model based on restorative justice. Under the model, school disciplinary action focuses on school safety, student performance and increased student engagement in the process.

Block favors policies based on positive behavior intervention, which he describes as “measured approaches to both help students want to behave in the right way and isolate those moments in the day where you have discipline issues to try to prevent them.”

In Fairfax, irate parents—with the help of local lawyers—have banded together to force the school system to modify its disciplinary policy, which has been blamed for contributing to the suicide of another student two years earlier. In March 2009, Josh Anderson—a football player like Nick Stuban—took his own life before a second disciplinary hearing for marijuana possession.

The Rutherford Institute and other civil liberties organizations have taken notice of the cases. In February, John W. Whitehead, Rutherford’s president, wrote to the superintendent of Fairfax County Public Schools expressing concern over how the disciplinary process was handled in the Stuban case and asking for a review of the system’s policy.

The Fairfax school system insists that its disciplinary policy, though strict, is not zero tolerance. The school board is reviewing that policy, and the superintendent has proposed additional changes.

“There’s a new generation of parents,” Domenech says. “The school district is doing what every school district has to do by reappraising in response to the changing values of the parent community.”