A Sixth Sense: 6th Circuit Has Surpassed the 9th as the Most Reversed Appeals Court 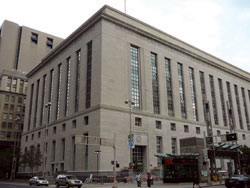 The Potter Stewart U.S. Courthouse in Cincinatti is the home of the often-reversed 6th Circuit Court of Appeals.

For some time, the 9th U.S. Circuit Court of Appeals has suffered a reputation as being the circuit most at odds with the U.S. Supreme Court. The San Francisco-based court has frequently been the most reversed among the circuit courts, with one term in the mid-1990s seeing 27 of its 28 decisions reversed or vacated by the high court.

Conservatives decry the 9th Circuit’s perceived liberal bent. As candidates for the 2012 Republican presidential nomination, Newt Gingrich practically recommended abolishing the circuit, while Rick Santorum suggested that its judges be banished to Guam.

But more recently, another federal circuit has reigned as the most reversed. The 6th Circuit, based in Cincinnati, has had a particularly dismal record before the high court. In the seven Supreme Court terms completed since the fall of 2005, the 6th Circuit has been reversed 31 out of 38 times, for an 81.6 percent reversal rate, based on figures compiled by two Philadelphia lawyers. That leads all the federal circuits for that time period, with the 9th Circuit coming in as the second most reversed—100 out of 128 cases, or 78.1 percent.

“Is the Sixth the New Ninth?” asked the Volokh Conspiracy blog in February 2011. That same month, the Cincinnati Enquirer said the 6th Circuit was “suffering through a major slump” and “keeps getting the law wrong.” Those observations appeared before the 6th Circuit was reversed five more times in the spring of 2011, not to mention the five (out of five) of its decisions reversed in the Supreme Court’s 2011-12 term.

“Statistically, there is a case to be made that the 6th Circuit is approaching, if not exceeding, the reversal rate of the 9th Circuit” in recent terms, says Neal K. Katyal, a professor at Georgetown University Law Center and a former acting U.S. solicitor general under President Barack Obama.

Katyal addressed the 6th Circuit conference last summer in Lexington, Ky. He said there was no perceptible sense of dejection or self-doubt among the judges on the court, which covers Kentucky, Michigan, Ohio and Tennessee.

The judges could have been excused, though, if they had displayed such emotions after the last Supreme Court term. In one case, the high court reversed the 6th Circuit’s decision that a teacher at a religious school was covered by the “ministerial exception” to the civil rights laws. The 6th Circuit “committed three errors” in its legal analysis, Chief Justice John G. Roberts Jr. said in the unanimous Jan. 11 opinion.

Earlier in the term, the Supreme Court summarily reversed a decision in which the 6th Circuit had issued a writ of habeas corpus to an Ohio defendant convicted of murder. The Supreme Court unanimously said that “because it is not clear that the Ohio Supreme Court erred at all, much less erred so transparently that no fair-minded jurist could agree with that court’s decision, the 6thCircuit’s judgment must be reversed.”

Last June, the justices found another 6th Circuit case to reverse summarily, and this time it used unusually impatient language.

“It was plain and repetitive error for the 6th Circuit to rely on its own precedents in granting [a convicted murderer] habeas relief,” the high court said in Parker v. Matthews. The court added that the 6th Circuit’s decision was “a textbook example of what the Antiterrorism and Effective Death Penalty Act of 1996 (AEDPA) proscribes: ‘using federal habeas corpus review as a vehicle to second-guess the reasonable decisions of state courts.’ ”

The summary reversal in Parker was a “smackdown” and a “clear rebuke” to the 6th Circuit, Case Western Reserve University law professor Jonathan H. Adler wrote in the Volokh Conspiracy.

“There is something to the idea that for at least part of the time in question, and in particular on issues such as habeas, there has been a critical mass of judges on the 6thCircuit whose views have been at odds with those of the [Supreme] Court,” says Adler in an interview. Habeas cases have been a particular issue for the 6th Circuit in recent years. In its 2009 term, the Supreme Court reversed the circuit in five habeas-related cases.

In a recent term, Michigan officials even complained in an appeal about a pattern by the 6th Circuit of usurping the role of the state courts by failing to properly apply the AEDPA.“I don’t recall anyone ever saying so explicitly that this is a pattern, and we are filing these appeals simultaneously to show you what is going on,” says Arthur D. Hellman, a University of Pittsburgh law professor and an expert on the federal appeals courts. “That was educating the Supreme Court in an interesting way.”

Despite the 6th Circuit’s recent track record, it has its defenders. Hellman says “there is a lot of happenstance” to the recent reversals. Pierre H. Bergeron, a partner at Squire Sanders in Cincinnati and an editor of the firm’s 6th Circuit Appellate Blog, notes that in some recent reversals of the 6th Circuit, the court had ruled the same way as a majority of other circuits on an issue, but the Supreme Court upheld the views of an outlier circuit.

Bergeron also attended this year’s 6th Circuit conference. “I don’t get the sense that the judges are walking around saying, ‘Oh, goodness. We’ve fallen out of favor with the Supreme Court,’ ” he says. “I’m sure it’s at the back of any judge’s mind that they don’t want to get reversed, and they are trying to apply the law correctly.”

By deadline, the 6th Circuit’s judges did not respond to an interview request submitted in writing to the circuit executive. In the Cincinnati Enquirer’s story in 2011, Senior Circuit Judge Gilbert S. Merritt, a noted liberal, suggested it could be a “badge of honor” to be reversed by the conservative Supreme Court. And just because his court had faced frequent reversals, “it doesn’t mean the 6th Circuit has lost its mind,” Merritt told the paper.

A new analysis of federal appeals court success and failure in the Supreme Court may lift the spirits of the 6th Circuit’s judges—a little.

Two Philadelphia lawyers, John S. Summers and Michael J. Newman of Hangley Aronchick Segal Pudlin & Schiller, argue that there is a better measure for evaluating appeals courts’ track records in the Supreme Court than the traditional look at whether a circuit has been directly affirmed or reversed.

The lawyers advocate for what they call the “full reversal rate measure,” which they say offers a more complete picture of whether a given circuit is in step with the high court. Basically, the lawyers examine cases in which the Supreme Court explicitly weighed federal circuit splits on a given legal question. If the high court adopted a view that one circuit took in a case decided earlier than the case directly before the court—which the lawyers call a “shadow decision”—then the shadow circuit gets credit for an affirmance under the full method.

“Our method looks at whether the Supreme Court reversed based on the analysis of [a given] circuit,” says Summers, whose firm has a whole section on its website devoted to the project.

Under the analysis, the 6th Circuit drops from the most reversed in the 2011 term, at 100 percent under the traditional method (and actually in a tie with the 2nd Circuit), to fourth-most-reversed for that term under the full method.

The specialized U.S. Court of Appeals for the Federal Circuit in Washington fared the worst on reversals under the full method in the 2011-12 term.