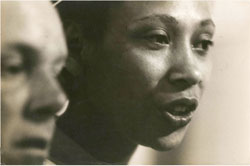 Photo of Richard and Mildred Loving by ©Grey Villet.

For most lawyers, the U.S. Supreme Court case Loving v. Virginia is a familiar one. The 1967 decision struck down Virginia’s antimiscegenation statute, which prohibited and criminalized interracial marriage. Now a documentary film is bringing to light the story of the people behind the seminal civil rights decision.

Filmmaker Nancy Buirski says she became interested in making The Loving Story after reading Mildred Loving’s obituary in the New York Times after her death in 2008. “The case was familiar to me,” says Buirski, “but not familiar enough.”

Buirski, who previously ran the Full Frame Documentary Film Festival, says she knew from her work that no documentaries had been made about Richard and Mildred Loving, the couple who helped changed history. “Not only was this an overlooked story but also—very often with important legal cases—you read about them and hear about them in law school, but you don’t know very much about the people involved,” she says. “The flesh and blood is often relegated to the background while the legal maneuvering is put in the foreground.”

The documentary features never-before-seen film footage of the Lovings, which was shot in 1965 during the pendency of the case by filmmaker Hope Ryden. Still images from Life magazine photographer Grey Villet also are integrated into the documentary along with historical and current interviews with the Lovings’ lawyers, Bernard Cohen and Philip Hirschkop. Peggy Loving, the namesake couple’s daughter, also participated in the project. Putting all this together, the film provides a unique look at the human side and the legal strategy behind the Loving case.

“I felt it was very, very important to draw attention to people who acted on principle and showed that anyone can change history,” Buirski says. “If you believe strongly in what is right, it can have a tremendous effect on society.”

Buirski, for her part, says the documentary has unusual relevance today with the debate over marriage equality and the racially blended society in which we now live.

The Loving Story will debut on HBO on Valentine’s Day. It currently is eligible to be nominated for an Academy Award in the feature-length documentary category.